Bitcoin has once again zoomed up to new highs near $7600 but could be due for a brief pullback before extending its climb. Price is moving above a short-term ascending trend line and is already testing support.

A bounce off this short-term support area could signal that bitcoin is in for  steep climb, but a break lower could put it on track for a larger retracement. Applying the Fibonacci retracement tool on the swing low since the start of the month to the latest swing high shows the potential correction zones.

The 61.8% level lines up with the ascending trend line connecting the lows since mid-September. This is also close to an area of interest and the 100 SMA dynamic support. Speaking of moving averages, the 100 SMA is above the longer-term 200 SMA so the path of least resistance is to the upside, which means that the uptrend is more likely to continue than to reverse.

However, stochastic is turning down from the overbought zone to indicate that buyers are exhausted and letting sellers take over. RSI is also heading south so bitcoin might follow suit until both oscillators hit oversold levels and turn back up. 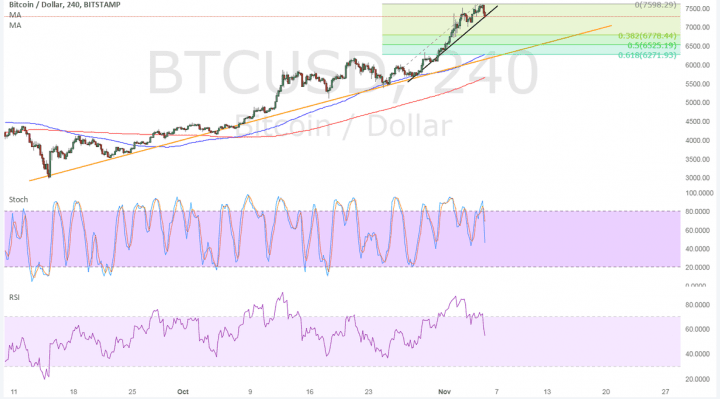 There are plenty of reasons to be optimistic about bitcoin, including the network upgrade and the rumors of CME launching bitcoin futures by the end of the year. Of course there are still potential roadblocks from here, which could lead to brief dips that could draw more buyers in at cheaper levels.

Bitcoin has also been supported by rising volumes in South Korea and Japan, slowly making up for the drop in trading activity from China. As it turns out, even conventional investors are moving some of their holdings to the cryptocurrency.

As for the US dollar, traders appeared to shrug off the downbeat headline NFP and weak wage growth. There was also a muted reaction to Trump’s nomination of Powell as next Fed Chairperson as this scenario has been priced in for a while already.