Bitcoin sold off after recently reaching new record highs, but the uptrend appears to be very much intact. Price is moving inside an ascending channel on its 1-hour time frame and has just bounced off support.

The mid-channel area of interest is providing a bit of resistance at the moment, but moving past this area could take bitcoin up to the latest highs or the channel resistance closer to $7600.

The 100 SMA is above the longer-term 200 SMA on this time frame so the path of least resistance is to the upside. However, the gap between the moving averages is narrowing to signal weakening bullish momentum and a potential downward crossover.

If that materializes, bearish pressure could return and spur a break below the channel support and 200 SMA dynamic inflection point around $7000. Stochastic is moving up but is in the overbought region to indicate exhaustion among buyers. RSI has a bit more room to climb but is approaching overbought levels as well. 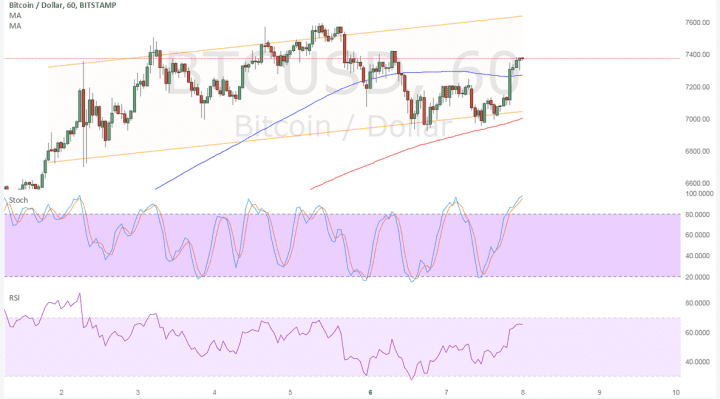 The US dollar has taken a hit across the board on speculations that Senate could impose a one-year delay before implementing the proposed tax cuts, assuming it does clear both houses. Congress is set to vote on the proposal next week and there has been some opposition with the GOP itself, so there are no guarantees.

Then again, Congress was able to pass a measure that eliminates the need to secure a supermajority in Senate and allows the plan to pass with a simple majority. In any case, updates on this issues could be the main driving force for the dollar, even against bitcoin.

Bitcoin also has its network upgrade to contend with and, although there are risks, the mood is mostly positive. Many expect this hard fork to turn out the same way it did in August, which led to bitcoin surging to one record high after another on stronger demand. After all, the cryptocurrency wound up being capable of handling more transactions since then.