Bitcoin is still trading safely inside its ascending channel on the 4-hour time frame but there are signs that bearish pressure is increasing. A short-term descending channel can be seen and price is currently testing the resistance.

Breaking past the $5700-5800 area or the all-time highs could be enough to confirm a return in bullish momentum that could take bitcoin up to the channel resistance around $6300-6400 or at least until the $6000 psychological barrier.

The 100 SMA is above the longer-term 200 SMA to confirm that the path of least resistance is to the upside. In other words, the rally is more likely to resume than to reverse. The 100 SMA is also close to the channel support at $5000-5200, adding to its strength as a floor. The gap between the moving averages is widening to reflect strengthening bullish pressure.

However, stochastic is already indicating overbought conditions on this time frame and looks ready to turn back down. In that case, bearish pressure could stay in play and push bitcoin back to the short-term channel bottom which lines up with the longer-term channel support around $5200. RSI appears to be turning higher to show that bulls are regaining the upper hand. 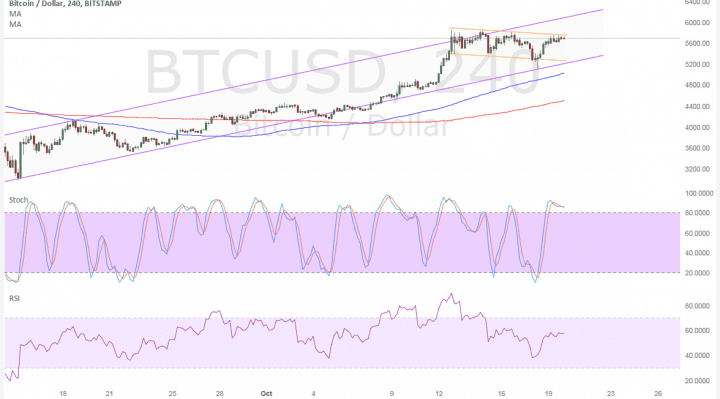 There is still a lot of investor interest in bitcoin leading up to the next network upgrade in November. If this is anything like the previous upgrade, the network could end up more stable and capable of handling more transactions than usual, which would mean more upside for bitcoin price.

The US dollar is dealing with some factors of its own, though, particularly the uncertainty surrounding the next Fed Chairperson. There haven’t been much updates after Trump’s meeting with Yellen but news reports suggest that he’s still leaning towards either Powell or Taylor.

In any case, data from the US economy has been mostly upbeat lately so there’s enough support for a December hike, but the focus is shifting more to next year’s tightening time line. Apart from that, market risks continue to keep demand for digital gold or bitcoin elevated.