Bitcoin is starting a new short-term trend lower against the dollar as bulls have trouble sustaining the recent rally. Price is trading inside a descending channel on the 1-hour chart and is currently testing support.

The 100 SMA is above the longer-term 200 SMA on this time frame so the path of least resistance is still to the upside. This signals that a bounce off support is more likely to occur than a break lower. However, the 100 SMA is right on the top of the channel at 5900, which adds to its strength as resistance.

Stochastic is heading lower to indicate the presence of selling pressure but the oscillator is also dipping into oversold territory. RSI already seems to be pulling higher to reflect a return in bullish momentum. 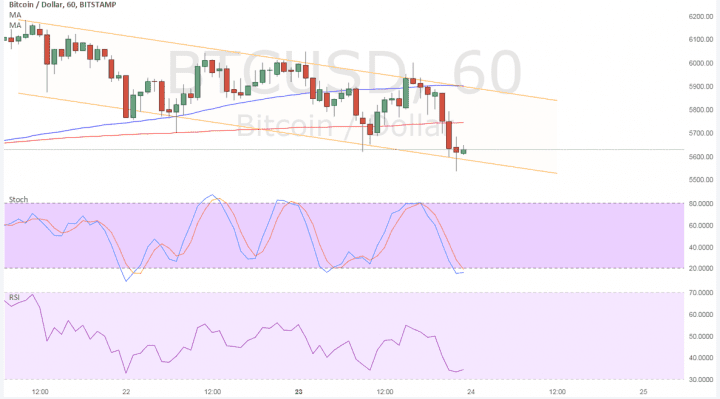 Investors appear to be getting more nervous ahead of the bitcoin network upgrade next month as rival version bitcoin gold gears up to launch on November 1. This could lead to a hard fork in which separate versions of the cryptocurrency are in existence.

Bitcoin gold is said to remove the reliance of the cryptocurrency on mining power as it makes use of cheaper means to mine blocks. This could weigh on the value of and demand for bitcoin core, which is much more expensive to mine.

As for the dollar, there is also some selling pressure as traders await Trump’s announcement on the next Fed Chairperson. Many worry that a dovish pick could hurt tightening odds for 2018, although part of the focus is still on upbeat data and the chances of seeing a December hike.