Bitcoin has formed lower highs and found support just above the 4000 mark, creating a descending triangle pattern. Price is also in a head and shoulders formation on the longer-term time frames but bears don’t seem to have enough energy to go for a breakdown just yet.

Bitcoin is currently testing the top of the triangle which lines up with the 200 SMA dynamic resistance. The 100 SMA is below this longer-term moving average so the path of least resistance is to the downside, which suggests that the resistance is more likely to hold and push price back down to support than to break.

Stochastic is also pointing down from the overbought area to signal a pickup in selling pressure. RSI is also turning lower to indicate that bearish momentum is picking up. If sellers are strong enough, they could push for a break of the triangle support. The chart pattern spans around 1000.00 so the resulting breakout could be of the same size. 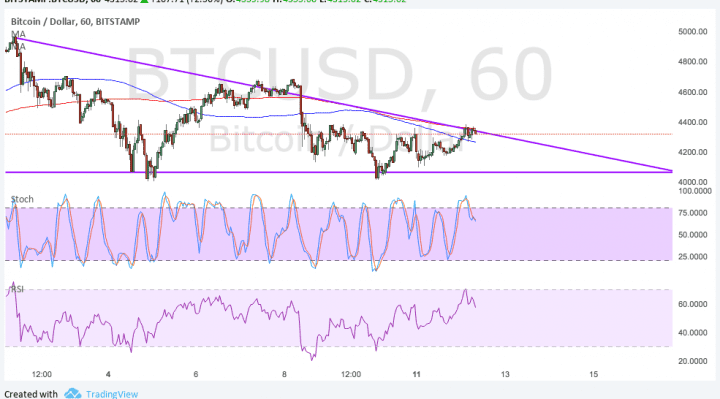 Bitcoin has been in a holding pattern for a few days already as investors are waiting to hear confirmation on rumors that China will be shutting down exchanges like OKCoin, Huobi, and BTC China. So far the only official piece of information was that several government agencies issued a ban on ICO funding but the latest rumor on exchanges came from an unofficial source.

This keeps uncertainty in play for cryptocurrencies as some traders have already liquidated their positions in anticipation of a huge dent in bitcoin demand and trading activity. This scenario could also lead to a downside break of the head and shoulders pattern visible on the 4-hour time frame, sending bitcoin on a longer-term selloff.

On the other hand, any reports indicating that these are all but rumors could revive demand for bitcoin on a relief rally. A bit of geopolitical risk is still in play since the UN just passed a new set of sanctions on North Korea and even though these are watered down, there’s a strong chance that Pyongyang could retaliate.