Bitcoin has sold off sharply towards the end of the previous week on confirmation that the Chinese government is shutting down cryptocurrency exchanges in the country. Price found support around the $3000 area and is making a correction to the broken support at $4000.

This lines up with the neckline of the head and shoulders reversal pattern, which might now hold as resistance moving forward. It is also around the 50% to 61.8% Fibonacci retracement levels that could keep gains in check.

The 100 SMA is crossing below the longer-term 200 SMA to confirm that the path of least resistance is to the downside. These moving averages are also in line with the 61.8% Fib, which might be the line in the sand for a correction. A break past the $4200 area could indicate that buyers are regaining control and that a test of the record highs is underway.

Stochastic is also climbing but is already dipping into the overbought zone to suggest rally exhaustion. Once the oscillator turns lower, selling pressure could return and bitcoin could follow suit. RSI, on the other hand, has some room to climb so the correction could be in play for a bit longer or buyers could try to wrestle back control. 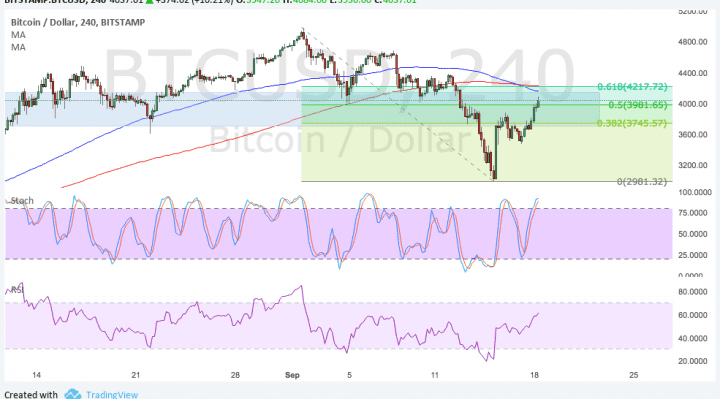 Downbeat retail sales data from the US dampened the dollar’s rally at the end of the week, allowing a bit of reprieve for the bitcoin selloff. There were a number of factors that weighed on the cryptocurrency then, but the BTC China update on halting trading by September 30 was the nail in the coffin for bitcoin.

Looking ahead, the FOMC decision would likely be the main event risk for the dollar since this would also include updated Fed forecasts and a presser. No actual rate changes are eyed so traders are now turning their attention to clues that might influence December tightening odds.

Downgrades to growth estimates stemming from Hurricanes Harvey and Irma could keep weighing on the dollar but words of reassurance from Fed head Yellen could still allow the US currency to stay supported.