Bitcoin is testing the top of its new ascending channel on the 1-hour time frame, probably making its way back down to support from here. Applying the Fibonacci retracement tool on the latest swing low and high shows that the 50% level coincides with the channel support and could keep losses in check.

However, the 100 SMA is below the longer-term 200 SMA so the path of least resistance is to the downside. This means that the selloff could carry on for much longer, possibly even taking price below the channel support and onto a longer-term drop.

Then again, the gap between the moving averages is narrowing to signal weakening selling pressure. If an upward crossover materializes, bullish pressure could return and lead to a bounce back up to the swing high at $3972.71 or up to the $4000 major psychological resistance.

Stochastic is on the move down so bitcoin could have room to drop further. RSI is also heading south, which means that sellers are still in control of price action until the oscillators reach oversold levels and turn higher. 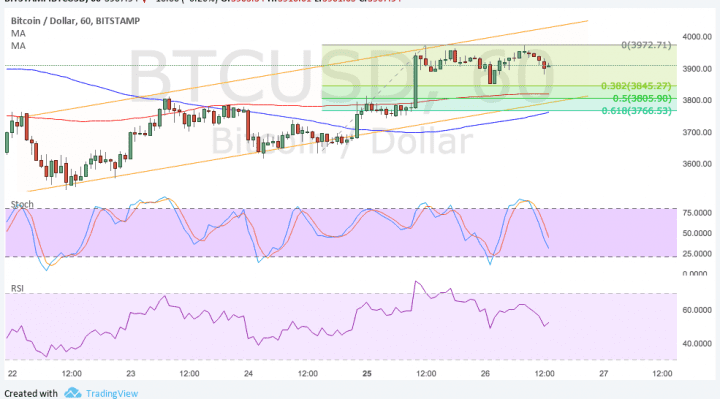 The dollar has paused from its climb today when Fed Chairperson Yellen admitted that policymakers may have overestimated the strength of the labor market and the pace of the potential pick up in price levels. At the same time, bitcoin has been able to draw support from the return in tensions from North Korea.

For now, though, the situation seems to be stabilizing as there were no new harsh words from either side. But if the conflict escalates again, bitcoin is poised to take off as it usually does during risk-off days. Traders typically go for higher returns in other markets outside of stocks and commodities, allowing bitcoin to act as digital gold.

However, moves have been limited these days as volumes have taken a considerable hit after China shut down bitcoin exchanges in the country. Traders are also on the lookout for more regulations from the country or for any news that exchanges could reopen to comply with rules.