$BTC
Welcome to 2022 – the year of Crab pic.twitter.com/jbccKsCUNx

As it dropped, Bitcoin also halfway validated a classic bearish continuation pattern that threatened to send the prices towards $30,000. 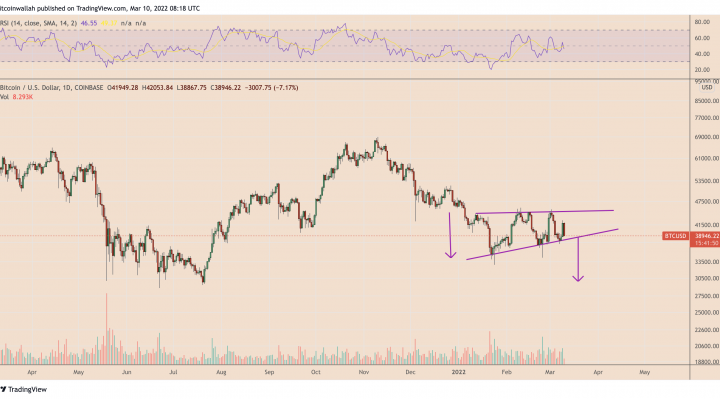 The so-called “ascending triangle” setup appears when prices trade within a tightening range, with a rising trendline acting as support and a horizontal trendline as resistance. Its basic tenet is to send the price in the direction of its previous trend. So, in a downtrend, ascending triangle raises the possibility of the price breaking below the lower trendline, with a price target sitting at a length equal to the maximum triangle height.

Applying the textbook definition on Bitcoin raises its chances to break out of its ascending triangle range to the downside. In doing so, BTC’s price will likely fall towards $30,000 if one adds the maximum distance between the triangle’s upper and lower trendline — around $10,500 — and add the outcome to the breakout point (around $38,000 but could be higher).

Even a $20K Price Target is Possible

Switching from daily to weekly charts shows Bitcoin in a long-term bearish overhaul.

The downside outlook appears after taking cues from the cryptocurrency’s previous bearish cycles. In detail, BTC’s price tends to bottom out at its 200-week exponential moving average (200-week EMA; the orange wave in the chart below) before beginning a new bullish cycle. So, it appears that the top crypto is now heading towards $20,000, where the 20-week EMA is located. 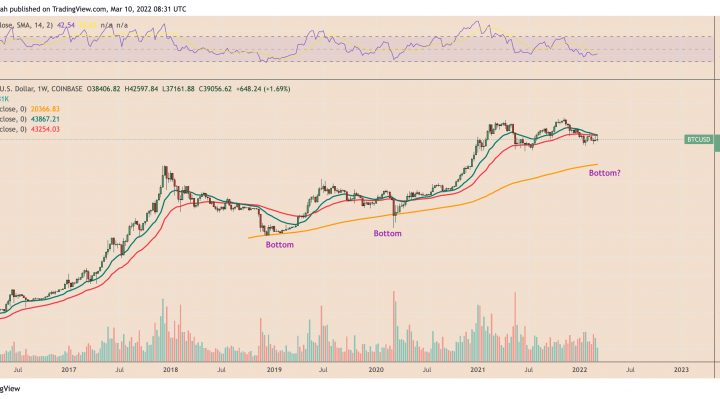 So, indicators tell it is not the right moment to go extremely bullish on Bitcoin. Meanwhile, additional downside pressure could also come from the Federal Reserve’s scheduled rate hike later this month.