The flagship cryptocurrency, which many consider a haven for its gold-like scarcity, fell by nearly 5.5% in less than 48 hours, hitting $36,350 in the early London session Tuesday. Its drop mirrored similar downside moves across the risk-on market, with Europe’s regional Stoxx 600 gauge falling 0.5% and futures tied to the U.S. benchmark S&P 500 plunging 1.1%.

On the other hand, Brent crude surged 3.8% to almost $99 a barrel, with speculators assessing possibilities of a lower supply from Russia as international leaders vowed to respond with sanctions. Futures of the tech-heavy Nasdaq Composite, which has been moving in tandem with the Bitcoin price in 2022, also dropped 1.7%.

Gold dropped slightly but lingered near its six-month high, around $1,900 per oz.

In a heated response to an ongoing conflict between Ukraine and Russia, Putin directed his military to enter the internationally-recognized Ukrainian territories Donetsk and Luhansk regions. The European Union announced later they would agree on a package of sanctions against Russia on Tuesday. The United Kingdom also anticipates announcing sanctions against Russia on the same day.

Antonio Cavarero, head of investments at Generali Insurance Asset Management in Milan, told the Financial Times that the market entered a “risk-reduction” mood following Putin’s televised address Monday night, adding the outcome of a full-blown military conflict between Russia and Ukraine has still not priced in by investors.

As a result, Bitcoin has been suffering from the global risk-aversion mood while its top rival, gold, has been holding gains. A Bloomberg report published earlier Tuesday also revealed that BTC’s price relative to gold has now dropped to its lowest level since mid-2021, indicating that the ‘smart money has been moving into what investors consider traditional safe-havens. 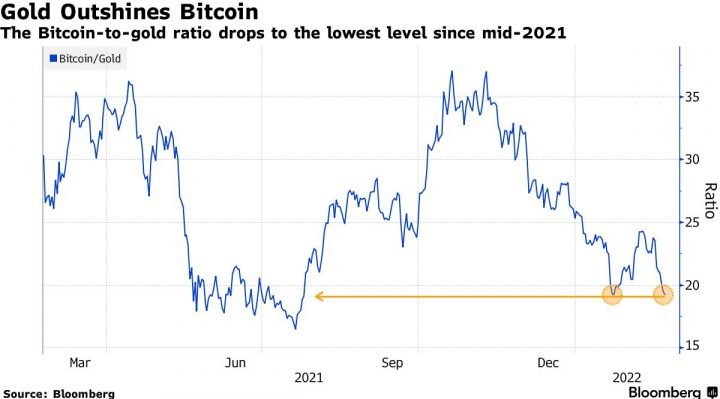 JPMorgan analysts wrote in their analysis that risk-on sentiment could dampen further due to fears that the U.S. central bank would tighten its accommodative programs aggressively, thereby sending investors looking for cash.

Looks like Bitcoin will not be safe haven in geopol crises. Digital gold (Bitcoin) has plummeted to <$37k, while Gold has risen >$1900/oz. Correlation between digital & analog Gold is now even neg. Narrative that digital Gold is better way to escape has not panned out in Ukraine. pic.twitter.com/94bH8eV7V3

As prospects of war loom over Ukraine, the country has been quick to legalize Bitcoin and similar digital assets. In detail, the Verkhovna Rada — Ukraine’s parliament — passed “On Virtual Assets,” with a majority of votes, according to an official statement released last week.

“The new law is an additional opportunity for business development in our country,” said Mykhailo Fedorov, Ukraine’s deputy prime minister and minister of digital transformation, adding:

“Foreign and Ukrainian crypto companies will be able to operate legally, while Ukrainians will have convenient and secure access to the global market for virtual assets.”

On the other hand, Russia planned to pursue a similar plan but landed in confusion against the possibilities of launching its digital ruble.