The price of bitcoin (BTC/USD) edge higher on Friday in the afternoon to trade above $11,000 after falling below earlier in the day. The price of the pioneer cryptocurrency dropped to bottom at around $10,820 on Friday morning but after midday, it rallied to recoup the losses rallying to trade at around $11,300.

The BTC/USD (Bitcoin) appears to be facing strong resistance around the $11,800/900 level and looks unlikely to retest the multi-year highs of about $13,868 it set late last month. The price of Bitcoin appears to be under significant downward pressure, which gives the bears the edge going into the weekend.

From a fundamental perspective, the price of bitcoin (BTC/USD) could fall further before the end of Friday’s trading session given the series of events scheduled in the US markets. The US Non-farm payrolls are coming in from 12:30 GMT alongside the unemployment rate, the average hourly wage growth and the average weekly hours among other key economic data.

The cryptocurrency market has been receiving a lot of positive sentiment over the last few months as more technology giants continue to join the industry.

However, in the last few weeks, the momentum appears to have started to dissipate with some traders potentially beginning to take profits. This trend could continue for a couple of weeks before the next major swing in the price of bitcoin and its counterparts arrives. 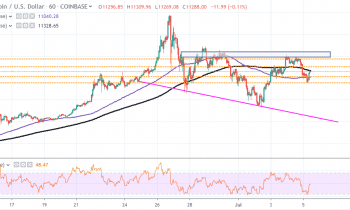 From a technical viewpoint, the price of Bitcoin (BTC/USD) appears to have recently become very volatile. The last two weeks have seen the BTC/USD hit a high of $13,868 and a low of about $9,756. The same choppy pattern appears set to continue through next week. 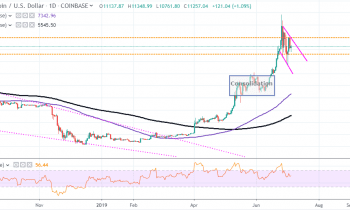 In the daily chart, the price of bitcoin appears to have recently made a pattern reversal. After a long period of a bullish run, the BTC/USD now appears to have become highly volatile in a downward trending channel.

This gives the bears the edge going into next week and they will be targeting long-term profits at around $10,621. On the other hand, the bulls will hope that the pair can bounce off the current support level soon and head towards the $11,973 level.

In summary, the price of bitcoin (BTC/USD) appears to be under immense downward pressure both in the short-term and the long-term outlooks. This gives the bears control as the week comes to an end.