Buying the Bitcoin Dip? MicroStrategy Adds Another 7K BTC to Its Reserves

MicroStrategy, a Nasdaq-listed business intelligence firm, purchased another 7,002 Bitcoin (BTC) tokens worth a combined total of $414.1 million so far into the fourth quarter.

In its securities filing with the U.S. Securities and Exchange Commission Monday, the company revealed that it paid an average of $59,810 per bitcoin. That came out to be almost $10,000 less than Bitcoin’s record high of $69,000, achieved earlier in November but was higher than the cryptocurrency’s current spot rate near $58,500.

As a result, MicroStrategy’s Bitcoin stockpile now has 121,044 units of the cryptocurrency, whose current worth is $7.09 billion against the original $3.57-billion investment. Meanwhile, the company’s chief executive officer, Michael Saylor, has vowed to keep buying more bitcoins, either with “cash flows or with debt or with equity.”

In its September earnings report, MicroStrategy revealed an impairment loss worth $754.70 million from its Bitcoin investments. However, that reading might have changed after Bitcoin’s price rally in the still-running final quarter of 2021. The cryptocurrency was eyeing a run-up towards $60,000 on Monday, as shown in the chart below.

MicroStrategy’s big revelation came when the Bitcoin market was reeling under the pressure of a global market selloff. That downside moves across traditional and crypto markets came to the surface due to the panic led by Omicron, a newer and possibly fast-spreading variant of Covid-19. 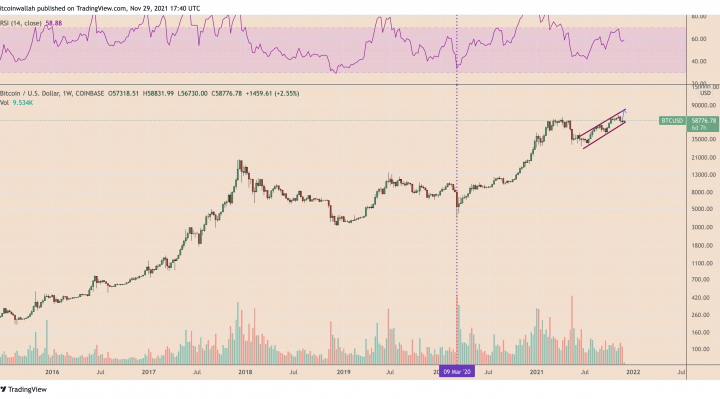 As a result, Bitcoin closed the previous week at a 2.31% loss but included a sharp price retracement in the session’s final two days. But entering the new week, the cryptocurrency had already rebounded from its $53,300-low to over $58,200, signaling that investors have been entering the BTC market to shield their portfolios from the uncertainties caused by Omicron.

Saylor has also previously called Bitcoin an ultimate hedge against the global market uncertainty. His opinion on the flagship digital assets has been mirrored across other corporates that have also made big bets on Bitcoin. For instance, Elon Musk’s Tesla purchased $1.50 billion worth of Bitcoin in February, whose current value is near $2.45 billion.