Bitcoin came closer to jumping the $11,000 level on Tuesday as traders assessed its growing adoption as a hedging asset.

MicroStrategy, a US-based public-traded company, announced earlier today that it acquired around $175 million worth of BTC units in a single purchase. That marked the firm’s second-biggest Bitcoin purchase in just over a month. Earlier in August, it has reallocated $250 million of its US dollar reserves to the benchmark cryptocurrency.

The pair climbed towards $11,000 in a sharp upside move but pared part of those gains on profit-taking sentiment among daytraders. Even so, it held above a critical support level of $10,700 as MicroStrategy validated Bitcoin as a long-term investment asset just like any other traditional investment.

“Single greatest financial decision of all time by a public company, hands down not even close. World-changing. MicroStrategy will be a key institution of the digital age now,” commented Francis Pouliot, the CEO of Canada-based Bull Bitcoin. “Who could have guessed?”

MicroStrategy’s decision to increase its exposure in the Bitcoin market also appeared a day ahead of the conclusion of the Federal Open Market Committee’s two-day meeting.

Analysts at TD Securities said in a note that they expect the Federal Reserve to send “a dovish signal through the wording on quantitative easing, the extension of the dot-plot through 2023, and the Chairman [Jerome Powell’s] press conference.”

Bitcoin pundits anticipate the cryptocurrency to turn up volatile upside moves towards $12,000, and even $20,000 as long as the Fed’s open-ended stimulus policy hurts the US dollar. That is the same reason why firms like MicroStrategy are raising their stakes in the crypto market. Excerpts from their August’s statement:

“Our decision to invest in Bitcoin at this time was driven in part by a confluence of macro factors affecting the economic and business landscape that, we believe, is creating long-term risks for our corporate treasury program ― risks that should be addressed proactively.”

Technically, Bitcoin is showing signs of continuing its uptrend towards and above $11,000 in the coming sessions. Especially as the FOMC looks to conclude its meeting on Wednesday, the cryptocurrency might close above the said level by then. 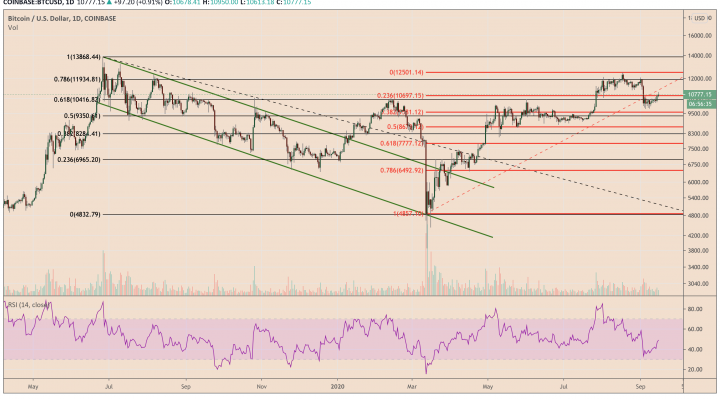 BTC/USD is maintaining support above a trading area made between the levels of two visibly accurate Fibonacci retracement graphs. That price floor is now sitting at $10,416-$10,697 range.

The pair might hold the area for another day as traders open new long positions against the FOMC meeting outlook. That would most likely push the price towards $11,000, a psychological resistance target.

BTC/USD can expect another retest of the sessional lows near $10,700 before continuing further higher above $11,000. Should that happen, the pair could extend its rally towards the next Fib range defined by the $11,934-12,501 area.

Traders can also expect to consolidate for a while above $10,700 before making a big upside move.