CADJPY recently broke above its descending trend line on the daily time frame to indicate that a reversal from the long-term downtrend is in order. Price is now trending higher inside an ascending channel and is bouncing off an area of interest.

If this keeps holding as support, CADJPY could make its way up to the channel top closer to the 85.00 handle. Sustained bullish momentum might even lead to a break higher while a return in selling pressure could take the pair down to the channel support and broken trend line resistance closer to 82.00.

The 100 SMA is below the 200 SMA to indicate that the path of least resistance is to the downside or that the selloff is more likely to resume than to reverse. Then again, the gap between the moving averages is narrowing to reflect weakening selling pressure and a potential bullish crossover. Price is finding support at the 200 SMA dynamic inflection point as well.

RSI has been on the move down but is pulling higher to signal a return in bullish pressure. Stochastic is also crossing up before even hitting the oversold region, indicating that buyers are ready to regain the upper hand. 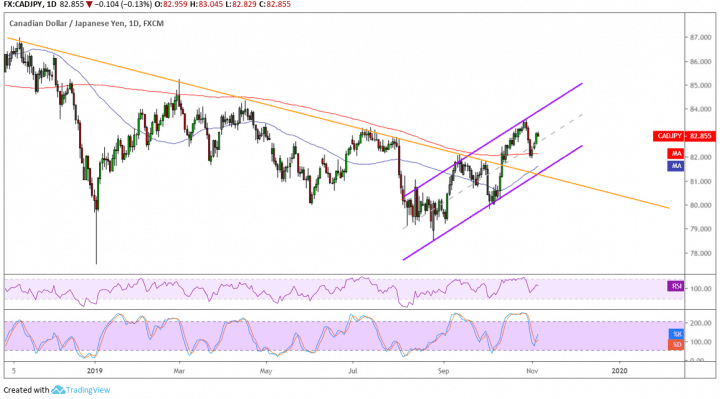 The Canadian dollar took some hits late last week when the BOC shifted to a more dovish stance, even as they refrained from cutting interest rates in their policy statement. Still, the openness to further easing if necessary has kept the Loonie’s gains in check.

Canada’s jobs report is due next and this could feature a slower pace of hiring in October compared to the strong gains over the previous two months. A disappointing read could stoke rate cut expectations and drive the Canadian currency further south.

Meanwhile, the Japanese yen is also under shaky footing these days as the BOJ affirmed its easing bias as well.