EURJPY was previously trading below a descending trend line on the 4-hour time frame but has just broken higher to signal that a reversal is due. Price might be due for a retest of this former resistance, which might hold as support moving forward.

The 61.8% level is closest to the broken trend line around 121.60 where buyers might be waiting to join in. Price is currently testing the 38.2% Fibonacci retracement level at the 122.20 mark, which might be enough to keep losses at bay. This is also in line with the 100 SMA dynamic inflection point.

On the subject of moving averages, the 100 SMA is below the longer-term 200 SMA to indicate that the path of least resistance is to the downside. In other words, there’s still a chance for the selloff to resume. Price is above the 100 SMA to signal the presence of bullish pressure but has been rejected at the 200 SMA dynamic resistance. 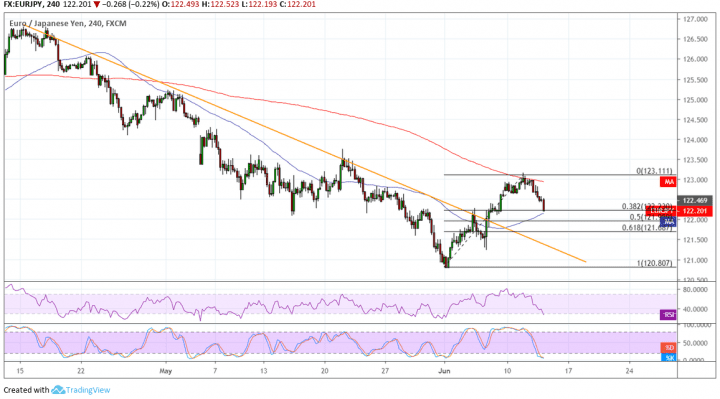 There are no major catalysts lined up from the euro zone and Japan this week, which could keep this pair in consolidation for the time being or sensitive to risk sentiment.

There has been some relief to the trade tensions narrative when the US didn’t push through with its tariffs on Mexico, but the beef with China is still in full swing. Increasing odds of another round of retaliatory measures from both nations could bring risk aversion back to the table and push the lower-yielding yen higher.