Leverage is the extra capital provided to traders by forex brokers to enable them control large trade positions with small amounts of money. Forex is a highly leveraged market. Pricing of currency pairs are quoted to four or five decimal places. In other words, a single tick movement of a currency pair is worth just 0.0001 points or 1/10000th of a point. Most brokers offer 5-digit pricing in which the value of the last point is one-tenth of the value of the 4th decimal. That is how small a tick movement of a currency pair is. When you consider that it costs $100,000 to setup a Standard Lot trade on a currency pair, you can imagine the challenge that many traders would have. Many traders on the retail end of the market can only afford a few thousands of dollars as account capital. Ordinarily, a Standard Lot worth $100,000 only produces a return of $10 a pip. Some currency pairs only average 100 pips movement a day, so the potential profit that can be attained by staking $100,000 in a trade is just an average of $1,000. For traders trading one mini-lot, they would require a $10,000 input into the trade to potentially make just about $100. So even if a trader were to have enough money to come up with the full margin required for the trade, the potential reward without leverage would be very small indeed.

This is why the forex market operates with leverage. Leverage allows the trader to come up with only a small portion of the full amount required in order to setup a trade, yet potentially reap whatever profits may accrue from the trade in full value. So with a leverage of 1:200, a trader who wants to trade a Standard Lot would have to come up with 1/200th of $100,000, or $500. Any profits or losses from leveraged trades are borne by the trader in full value.

So where does the balance of the trade amount (margin) come from? It is provided by the broker. So the broker is also assuming a risk in the trade. However, brokers are able to control the risk using a facility called the margin call. In other words, when the trade is losing money to the point of wiping out the trader’s own margin, the broker will issue a margin call. The margin call instructs the trader to immediately fund the account or risk closure of all open trades which are in losing positions.

Can Forex Brokers Always Control Risk With a Margin Call?

More often than not, margin calls act as a sufficient buffer for brokers in the face of the market risks described above. But once in a while, certain market events will overwhelm the ability of a margin call to control such risks. One of such events occurred on January 15, 2015 when the Swiss National Bank abandoned its 4-year old EUR/CHF minimum peg which had been fixed and maintained at 1.2000. When the peg abandonment was announced, the Euro plunged almost 4,000 pips against the Swiss Franc, taking out stops that had been set by traders and market makers just below the 1.2000 mark. With such hefty volatility that occurred in a matter of seconds, it became impossible for brokers to close out orders with margin calls or to find corresponding buyers of the Euro to close out the stop loss orders which had been set by those who were long on the EURCHF. Many brokers who had allowed their clients to use high leverage of up to 1:500 were hit by massive losses. FXCM had to secure a $300million lifeline from Leucedia to avoid insolvency. Alpari UK was not so lucky. It was forced to go under as it did not have the cash to survive the massive losses it sustained as well as cover the negative positions of its clients. But a few brokers who reduced their leverage exposure and increased the margin requirements on CHF pairs were spared.

Unlike financial news events where there are consensus numbers that can serve as a basis for predicting the direction and market impact of a news release, political events have nothing on which market impact can be referenced. There is just no way to predict how the markets will respond to a political event. As can be seen from the surprise Trump election victory and the 48-hour market response of global financial markets to that event, anything is possible and nothing is impossible.

The market events of January 15, 2015 have changed the way forex brokers do business. This was an event that mimicked a political news event because it was sudden and unexpected. As a result, brokers now send messages to their clients warning them of leverage adjustments in currency pairs to be affected by major political events. 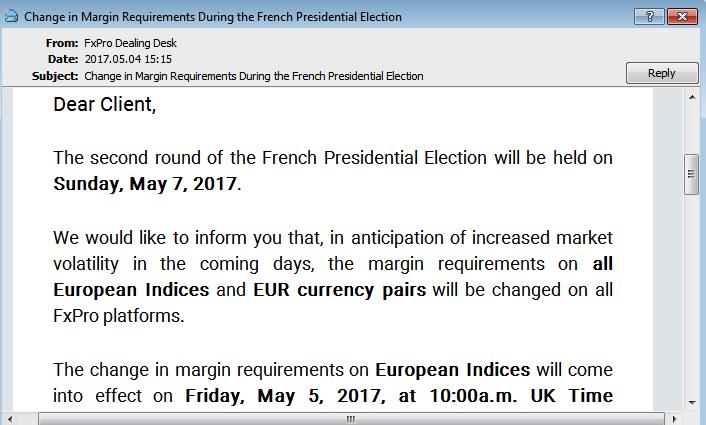 Similar warnings were sent out in 2016 for:

So brokers are now minimizing their exposure to the market by reducing their leverage provisions to as low as 1:50 (1:25 in some cases) in the days preceding such political events.

Why Brokers Adjust their Leverage/Margin Requirements

When brokers reduce the leverage that they provide to traders, they are also increasing the margin requirements for the traders. In other words, reduction of leverage increases the amount of money that a trader needs to open and maintain a trade position.

We will do some calculations to see the numbers behind the decision to provide leverage restrictions during high impact political news. Let us look at the following scenarios.

Total loss to Joe is as follows:

Broker’s Loss is as follows:

The ratio of Joe’s loss to the broker’s loss is 1:4. It is not hard to see how some brokers quickly amassed losses running into hundreds of millions of dollars when their traders who had been provided with high leverage lost out big on this market event. Let us now see how reducing leverage and increasing margin requirements can protect both traders and brokers during high impact political events.

In anticipation of a market moving event, a broker reduces the leverage of Trader Joe to 1:25. Joe suffers a similar loss as shown above. What is the total loss sustained by Joe and the broker?

Trader Joe’s margin on 1:25 leverage would be $4,000. Accounting for 80% of his $5,000 account size, Joe would be forced to do one of two things to conform to risk management standards:

The two scenarios clearly show the numbers behind the decisions by brokers to adjust the leverage and margin requirements during news trades. Brokers adjust leverage to protect themselves from losses during high impact political news events.