GBPNZD has formed lower highs and lower lows to trend inside a descending channel on its 4-hour time frame. Price is testing the resistance and if this keeps gains in check, a move back to support might follow.

The 100 SMA is below the 200 SMA to indicate that the path of least resistance is to the downside. In other words, selling pressure is about to pick up from here and possibly take price back to the channel bottom around the 1.9800 mark.

Price has moved above the 100 SMA dynamic inflection point, though, as an early indication of bullish pressure. Then again, the 200 SMA dynamic resistance is just close by to hold as another upside barrier.

RSI is heading lower to show that bearish momentum is in play, especially as the oscillator attempts to cross below the center line as confirmation. However, stochastic is moving up to show that buyers have the upper hand and could push for a reversal from the selloff. 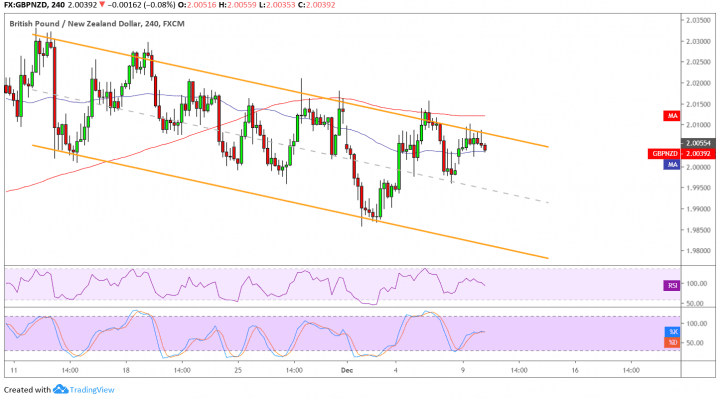 Sterling is waiting on the UK general elections to see if the Conservatives can get a majority in Parliament and help PM Johnson push his Brexit plans. Inability to secure a majority could mean losses for sterling as it would mean more political uncertainty.

Meanwhile, the Kiwi has drawn some support from mostly upbeat economic data in New Zealand, dashing hopes that the RBNZ might cut interest rates again soon. At the same time, the pickup in risk appetite has been positive for the higher-yielding commodity currency.

Continued easing of geopolitical risks, particularly when it comes to the US-China trade war, could bring more upside for the commodity currency. Traders are waiting to see if the US will push through with its tariffs on China by December 15 as this could stoke tensions and dampen hopes of a deal being struck soon.