The “support” describes an area below which price action of a currency pair is unable to go below following repeated contacts of the price action with that area. As such, the support area tends to act as a price floor because prices are prevented from heading below this level. The significance of the support is that buyers tend to start taking control of the market at this level because they see the potential for prices to start heading higher. Eventually, the actions of the buyers cause prices to go up.

The “resistance” describes an area above which price action of a currency pair is unable to go above following repeated contacts of the price action with that area. As such, the resistance area tends to act as a price ceiling because prices are prevented from heading above this level. The significance of the resistance is that sellers start to take control of the market at this level because they see the potential for prices to start heading lower. Eventually, the actions of the sellers cause prices to go down.

What Forms Support and Resistance Levels ?

Support and resistance levels can be identified in the following setups:

These setups are seen within various time frames and appear on the charts all the time. Identification and a knowledge of how to initiate and exit trades with these support/resistance tools is what is important.

Trend lines are straight lines which can be drawn to touch at least three areas of price highs or price lows. By this definition, trend lines can be used to delineate support and resistance levels. Trend lines can be horizontal or diagonal in orientation. Sometimes, only a single trend line can be traced either across price highs to form a resistance, or across price lows to form a support. At other times, two trend lines can be drawn; one across highs and the other across lows. This is commonly seen in chart patterns such as triangles, wedges, flags/pennants and channels. 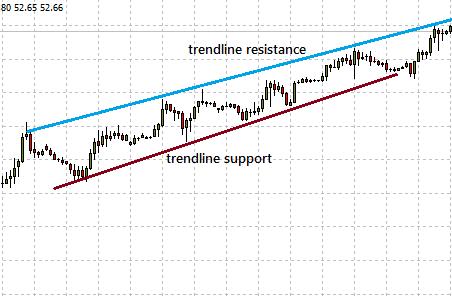 a. Psychological support/resistance (round numbers)

b. Indicators such as pivot points, Fibonacci levels

Indicators can also form the basis of support and resistance. Indicators here would include the moving average line, the Fibonacci retracement/expansion levels, Fibo fans and pivot points. Each of these indicators can be customized, depending on the trader’s preferences. Sometimes, indicators may have to be used in combination with each other to produce the best possible outcome (e.g. combining an oscillator with the Fibo retracement tool to determine the true support or resistance area). 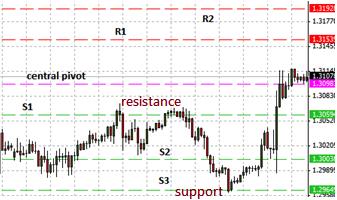 Support and resistance levels can be used in trade entries and exits. In each case, it is important to know if prices will stall at these key levels or support/resistance or break them.

If the price action stalls at these levels and they are tested several times, it is most likely a reversal will follow and this can be traded accordingly. However, if price action ends up breaking the key level as a result of very strong price action, then the principles of breakout trading must be applied and Limit orders used for entry. You will find out in the course of your practicing with this setup on demo that you will need confirmation of signals before you can actually determine with certainty whether the support or resistance will hold up. Furthermore, it makes it possible to place tight stops and have a liberal reward setting.

For trade exits, the nearest key level along the line of the trade should always be used as the first profit target. As price approaches this target, a trailing stop can be applied to see if the trade breaks this point and price can then be followed to the 2nd key support and resistance level.