WTI crude oil has formed higher lows and slightly higher highs to consolidate inside a rising wedge pattern on its 1-hour chart. Price is currently testing support and could be due for a move back to the resistance at $41 per barrel.

The 100 SMA is above the 200 SMA to indicate that the path of least resistance is to the upside or that support is more likely to hold than to break. These indicators also line up with the channel support around $39.50 to $40 per barrel, adding to its strength as a floor.

RSI is on the move up to reflect the presence of bullish pressure that could be enough to take price up to the wedge resistance. Stronger momentum could even trigger a break above it, followed by a rally of the same height as the pattern. Stochastic is also heading higher so price could follow suit, but this oscillator is already closing in on the overbought zone. 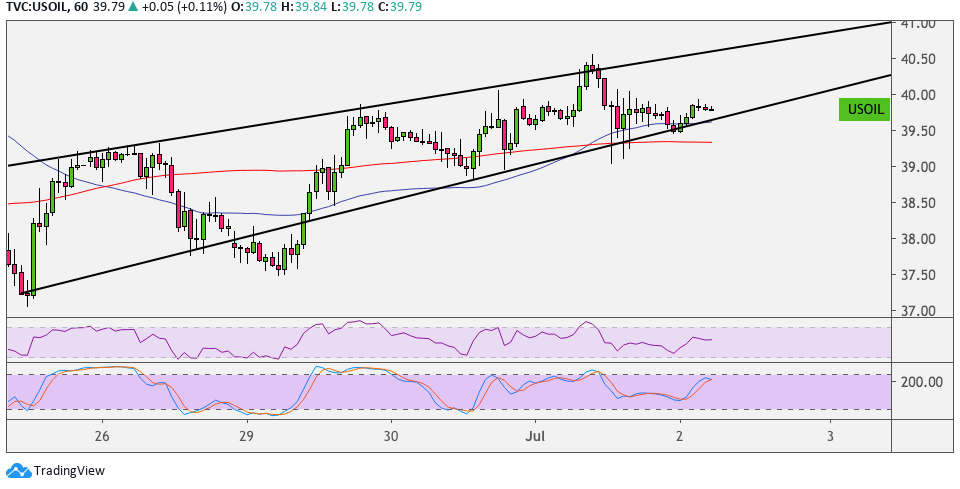 WTI crude oil enjoyed some upside as the Energy Information Administration reported a draw of 7.2 million barrels in stockpiles. This signals a pickup in demand over the previous week as more states and businesses reopened then.

However, fears of a second wave of the pandemic could keep risk appetite in check, possibly forcing the commodity to return some of its recent wins. A break below the wedge bottom could set off a drop that’s at least the same size as the pattern.

Also, the upcoming NFP release could have a material impact on market sentiment, enough to push commodities strongly in a particular direction. Strong results could usher in risk appetite, which would be bullish for crude oil, while a downside surprise could bring in risk-off flows. Traders are expecting to see a gain of around 3 million in employment for June.