The price of bitcoin on Friday bounced off 2-week lows to top the key level at $7,200 to recoup the losses incurred on Thursday. The bitcoin price has been trading in a sideways movement since late November amid short-term consolidation.

Bitcoin appears to be lacking a definitive swing in market sentiment with both the bulls and the bears challenging to hold on to the $7,200 key level. The price of the pioneer cryptocurrency trimmed mid-year gains of more than 350% to close just under 100% high from the 2018 close.

From a fundamental perspective, the price of bitcoin is trading at the back of a relatively volatile year. However, in the last two months, the pioneer crypto appears to be lacking enough fundamental backing to significantly tilt the market balance in favor of the bulls or the bears. Nevertheless, based on the latest round of economic data and news about cryptocurrencies, things could change soon.

And on Thursday, the US initial jobless claims beat the expected claims of 225k with 222k while the continuing claims eclipsed the expected number of claims of 1.719M with 1.728M claims. Overall, data appears to be mixed, which is why there is no definite direction for the BTC/USD. 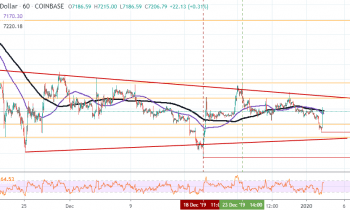 Technically, the BTC/USD appears to be trading within a consolidative sideways wedge amid a lack of clear market direction. Bitcoin has recently bounced off oversold levels and now appears closer to reaching overbought levels of the RSI indicator in the 60-min Chart. 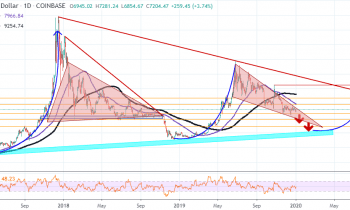 In the daily chart, the price of bitcoin appears to trade in a consolidative bearish wedge well below the current levels of 100-day and the 200-day SMA lines. The bulls appear to be attempting a reversal but this could prove difficult given the current bearish pressure.