Bitcoin is spending the first days of 2020 in a red area. 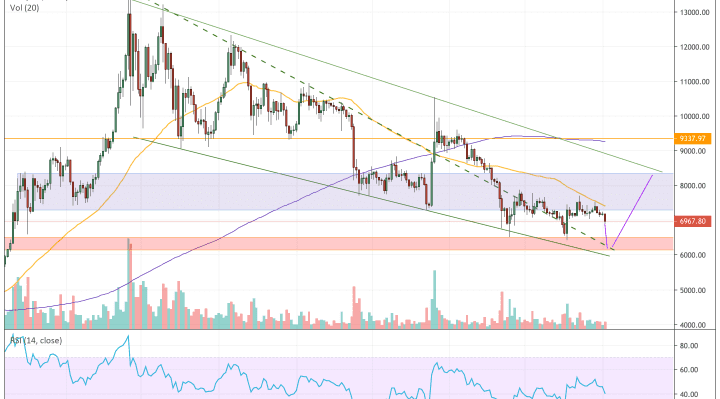 Bitcoin’s move downhill came after undergoing an overstretched sideways trend. Since December 19, the cryptocurrency was trending within strict trading parameters, accompanied by low volatility and volume. The $7,400-level behaved as strong support and kept the price from establishing an interim bullish bias.

Similarly, the $7,000-7,100 area acted as crucial support whenever price hinted a crash. So it appears, the lack of upside momentum drove traders to exit their long positions, which drove the bitcoin price downward.

The drop in bitcoin prices followed criticism from a high-profile financial expert.

“[Bitcoin] has no real utility in the world. They’ve been trying to create a utility for it for ten years now. It’s a solution in search of a problem and it still hasn’t found a problem to solve,” said Mr. Kapfidze.

The statement further came at a time when institutional investors were hinting to minimize their exposure in the bitcoin market. The Chicago Mercantile Exchange in its latest report noted a 7.74 percent drop in its bitcoin futures contracts’ open interests.

On the other hand, bitcoin’s rival Gold continued to register gains upon opening 2020. It rose in tandem with equity markets which showed that investors wanted to remain exposed to traditional assets, not to an offbeat asset like cryptocurrency.

“Continuing the Dec. the trend all asset classes are rising, except Bitcoin. [It] may have been the best performing asset of the last decade, but it’s already the worst-performing asset of this decade. While I think U.S. stocks will soon drop, I think Bitcoin will fall even faster,” said Peter Schiff, CEO of Euro Pacific Capital.

The Bullish Call for Bitcoin

While Mr. Schiff remains skeptic, many long-time bitcoin followers believe the cryptocurrency could close 2020 on even a more profitable note than it did in 2019.

This last decade brought Bitcoin use from a handful of cypherpunks to 1% of the world. The next decade will bring us to half of the world.

Theories indicate that institutional investors’ appetite for equities has surged because of the US central bank’s dovish policies. The Federal Reserve is actively expanding its balance sheet by hundreds of billions of dollars. Atop that, the bank has introduced three rate cuts last year, which is allowing investors to offload the fresh cash supply in stock markets.

Morgan Stanley last month confirmed that the Fed would more likely end the expansionary practice by April/May. Interestingly, that is the same period when bitcoin’s supply rate would come down from 12.5 BTC per 10 minutes to 6.25 BTC per 10 minutes.

As stock market dwindles, investors could allocate a certain position of their portfolio to an underbought bitcoin.