Bitcoin is still in correction mode but appears to be finding support at the current area of interest. A bounce off this level could allow the uptrend to resume, probably taking price up to the Fib extension levels next.

The 100 SMA is above the longer-term 200 SMA to confirm that the path of least resistance is to the upside. This suggests that the rally is more likely to continue than to reverse. However, it’s also worth noting that bitcoin is trading below both moving averages to reflect the presence of bearish momentum.

Stochastic appears to be on the move up but is changing its mind halfway through its climb to the overbought region. RSI is treading sideways close to the oversold region to signal exhaustion among sellers but that bullish momentum hasn’t quite returned yet.

A break below the area of interest around $16,000 could expose bitcoin to further losses, possibly taking it down to the next support around $14,000. 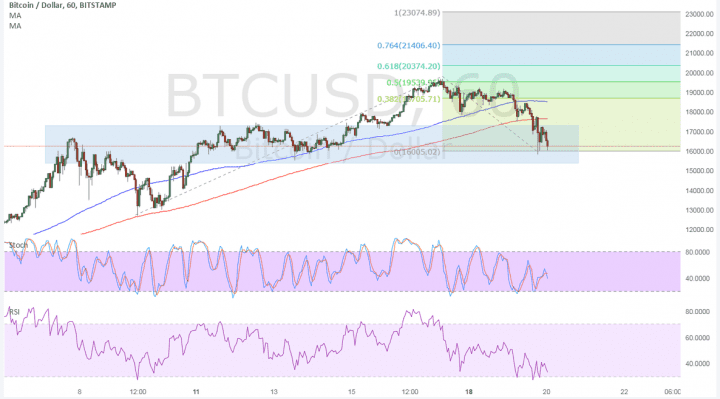 The US dollar has been able to regain ground against most of its peers when the House passed the tax reform bill. However, procedural conflicts with the Senate version led to yet another vote being scheduled. Although many expect this to go by without a glitch, the delay could still lead to a dip for the dollar.

In any case, if Trump is able to sign the bill before Christmas, it could mean an influx of funds to US stocks and therefore the dollar. This could take some of the attention away from cryptocurrencies after previously enjoying the spotlight leading up to the launch of bitcoin futures on CBOE and CME.

This profit-taking could carry on for the remainder of the year, barring any other major catalysts. There have been reports that a crypto fund has been shut down for alleged manipulation.