Bitcoin has formed lower highs and higher lows to create a symmetrical triangle consolidation pattern visible on its 4-hour and daily charts. Price is back to testing the triangle support, though, and may be eyeing a breakdown after forming these lower highs.

The 100 SMA is also below the longer-term 200 SMA to indicate that the path of least resistance is to the downside. In other words, the selloff is more likely to resume than to reverse. Price is also below these dynamic inflection points, which might keep holding as resistance.

A break below the triangle bottom could lead to a slide that’s the same height as the chart pattern, which spans $5,800 to roughly $10,000. However, RSI is on the move up after recently hitting oversold levels, suggesting that bulls could keep defending support.

Stochastic is also starting to move higher to signal that bullish momentum is about to return. In that case, another bounce to the resistance around $6,800 might be due, but the moving averages might also hold as nearby inflection points. 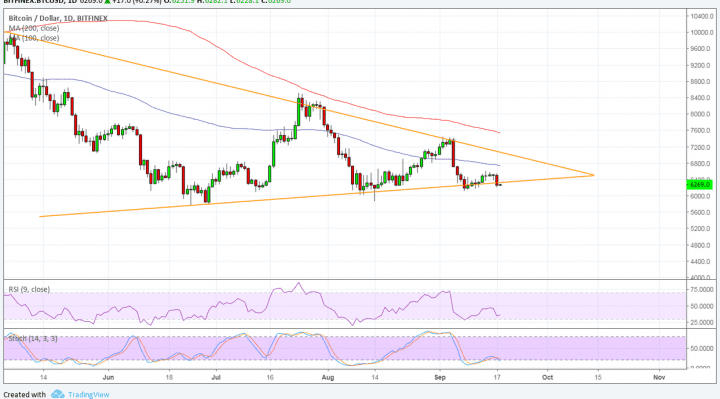 There appears to be no actual catalyst linked to the latest slump, although there has been some degree of risk aversion in the markets these days. After all, the US just imposed another set of tariffs on China so traders might be rushing out of their riskier positions to safe-havens like gold.

Then again, it could also be that traders are feeling more and more anxious ahead of the SEC ruling on bitcoin ETF applications, which seems to have a higher likelihood of rejection at this point. Recall that the regulator temporarily suspended trading in a couple of crypto-backed instruments, citing confusion for market participants as to the nature of the underlying markets, so they might cite the same reasons for the bitcoin ETF proposals.