Bitcoin literally escaped a deadly bear trap after crashing below $6,500 on Wednesday.

The leading cryptocurrency established an intraday low of $6,430 ahead of the New York session close yesterday. Nevertheless, a surprising price reversal brought it out of its imminent depressive area. As of 2200 UTC, bitcoin had surged to trade at $7,445, flashing hopes for an extended bullish bias in coming sessions. 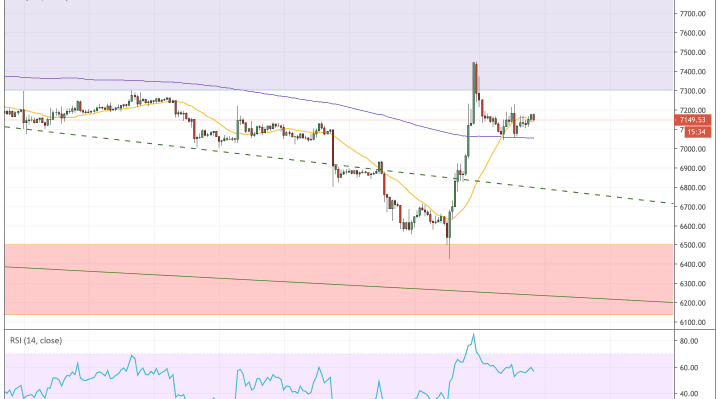 Bitcoin price dips below $6,500 only to rebound by 10 percent later | Source: TradingView.com

Forbes reported that the latest bitcoin rebound came to keep the cryptocurrency’s miners profitable in the near-term. The cost of mining one bitcoin averages near $6,300. It means mining rigs had to keep the price above the said level in order to stay functional.

“Anyone who waited for it to break before committing long earlier in the year, if not having exited already, will likely exit now,” he explained. “Break it and we have a liquidity event.”

Clark also suggested that bulls should not celebrate BTC’s interim trend reversal – not until the price breaks above the $8K level. He said the cryptocurrency could still likely test new lows.

Break 8k and we can get somewhat excited.

Anything other than that and you need to take some medicine for your craziness to assume this doesn't find its way to test that low again.

My thoughts are – attempt higher again, fail and drift slowly (at first) back to the lows.$BTC

Away from the technical barriers, some analysts projected long-term upside valuations for bitcoin based on its upcoming halving.

In May 2020, a predefined algorithm will cut bitcoin mining reward by half – from the current 12.5 BTC to 6.25 BTC. The move means a reduced cryptocurrency supply into the market. And if – by any luck – the demand of bitcoin goes up, it would shoot its price upwards.

Matthew Kaye, COO and Managing Partner at Blockhead Capital – a California-based investment management company, reminded the downside behavior of bitcoin ahead of its two previous halvings.

Revisiting this since we're objectively beyond a #bitcoin bull pull back & are looking for a bear trend reversal.

Mr. Kaye noted that history could repeat itself following the May 2020 event.