Bitcoin rose by more than $3,200 in October after China’s President Xi Jinping endorsed its underlying technology, the blockchain. Nevertheless, on Friday, the benchmark cryptocurrency lost all that it had gained.

The bitcoin-to-dollar exchange rate established a new intraday low of $6,928.31 during the early European session. The move downhill negated all the pair’s gains it had made after the Chinese support of blockchain. It suggested that October’s price rally – at best – was a fake breakout. Speculators pumped bitcoin on hopes that China was going to change its stance on cryptocurrencies, in general. But as the hype faded, it also took away up to $61.88 billion off the bitcoin’s market capitalization. 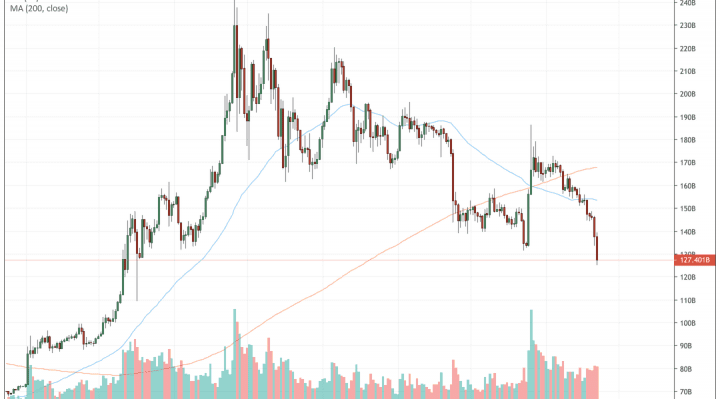 Bitcoin market cap has dropped by up to 32.88 percent from its local top | Source: TradingView.com

Other factors might also have contributed to the fall in the bitcoin price. Crypto Twitter was quick to blame small miners for capitulating their cryptocurrency holdings. Alistair Milne, Chief Information Officer at Atlanta Digital Currency Fund, noted a 7 percent drop in the bitcoin mining difficulty earlier this week. The downside indicated that there were fewer miners validating blocks on the BTC network, meaning they had to shut down their machines while fearing operational losses. Such a scenario historically saw miners dumping their BTC on the market.

Nevertheless, some noted analysts did not support the “capitulation” theory. PlanB, a reputed cryptocurrency analyst mostly known for his Bitcoin Stock-to-Flow model, called it a FUD – an acronym for Fear, Uncertainty, and Doubt, adding that difficulty adjustments are part of bitcoin minting cycles.

“Fact is that 6 months before 2012 halving we were above difficulty model value, in 2016 below, and now spot on. Also, I am looking at a +2% difficulty adjustment next Thursday. Cheer up,” said PlanB.

Alex Krüger, another prominent market analyst, also rubbished the miner capitulation theory, saying that the market is a long way from hitting such a scenario.

Bitcoin difficulty adjusted +2% today, it didn't crash as would be the case when miners are capitulating.

The increase is neither bullish nor bearish in the short term. There is no linear relationship between difficulty changes and 1 week returns (neither forward nor backward). pic.twitter.com/quGmkMU5cd 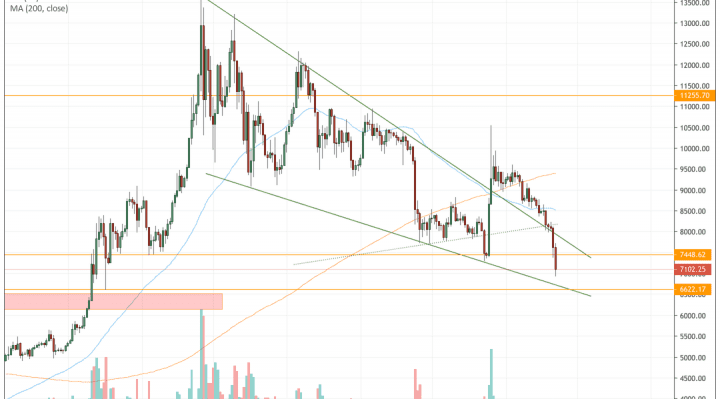 Bitcoin back in the falling wedge | Source: TradingView.com, Coinbase

The latest price action has brought bitcoin back inside the previous Falling Wedge pattern. As discussed in our analysis before the China-led rally, the cryptocurrency could continue to trend inside the Wedge, targeting its lower trendling as support and upper one as resistance. Therefore, the price could now test the area above $6,500 for a potential bounce back towards the upper Falling Wedge trendline. After that, it could pull back again to retest the support.

The fluctuation might go on unless bitcoin reaches to the apex of the Falling Wedge. Traditionally, asset breaks to the upside. But given bitcoin’s vast correction since its year-to-date high establishment near the $14,000 level, the Wedge parameters could adjust to give more room to downside sentiment. Perhaps, it could become a downward parallel channel, which is bearish.

In case of a breakdown below the Wedge support, traders could target $6,000 as their next Short target. A break above the Wedge resistance, at the same time, would have traders targetting $7,500 as an interim Long target.

[Disclaimer: The opinions presented above are of the author and author only. FxDailyReport.com takes no responsibility for the author’s accuracy.]