Bitcoin plunged to restest its three-week lows on Tuesday as a study alleged foul play in the cryptocurrency market.

Chainalysis claimed in a report that scammers involved with $2bn Chinese scandal PlusToken were actively liquidating cryptocurrencies via over-the-counter markets. The New York-based blockchain consultancy noted that individuals at large had dumped $185 million worth of stolen bitcoin since June.

The study matched dots with the cryptocurrency’s depressive price action that began during the same period. In June, bitcoin settled its yearly high of $13,868.44 on Coinbase exchange. Nevertheless, it failed to sustain the upside bias and crashed by as much as 52.94 percent in a wide bearish correction at a later stage. 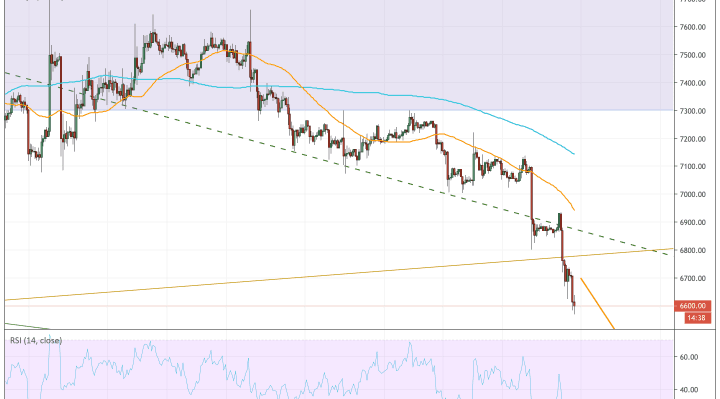 Chainalysis report came hours before the bitcoin’s latest downside moves. Since Monday, the cryptocurrency had dived by as much as 9.46 percent. The move downhill led it to establish an intraday low of $6,570.51. It also reiterated Chainalysis’s theory of PlusToken scammers dumping bitcoin on the market.

Social media also blamed the bitcoin price fall on the absence of adequate trading volume. Whales tend to open large selling or buying orders at such times. As a result, it is the market that follows their ask/bids instead of the other way around. Such moves trigger automated algorithms that send prices pointedly higher or lower.

“That’s certainly something to consider when you are thinking about where the price is going, at least in the short term,” Kim Grauer, senior economist at Chainalysis told Bloomberg. “It could be, according to our research, continued downward pressure.”

The drop in the bitcoin price also came at the time when the demand for safe-haven assets was declining. After the U.S. and China agreed to have a partial trade deal, investors shifted their focus on the risk-on assets. As a result, the capital moved from perceived havens such as Gold, the Japanese Yen, and US 10-year Treasury Note, to stocks listed on the Nasdaq Composite, Dow Jones, and S&P 500 indexes.

Bitcoin, a new rival to traditional havens, surged by more than 200 percent against a string of poor macroeconomic updates. The U.S.-China trade war, in particular, sent the cryptocurrency prices higher during the second financial quarter. But with most of those macroeconomic concerns easing in the near-term, bitcoin started appearing like a less-attractive asset.

Where do you think the bitcoin price would head next? Share your opinions in the comment box below.