Bitcoin opened the week in a negative area as investors showed no interest in buying it at “discounted” rates.

The benchmark cryptocurrency established an intraday low of 7025.45 on Monday, down 1.47 percent from the opening rate. The move downhill showed bias conflict – an asset’s inability to show the direction of its next trend. The confusing sentiment prompted traders to wait for a big move – a breakout – before they decided the next course of positions.

As a result, bitcoin was a rangebound asset most of the time last week.

Not entirely sure we are going to get a major continuation event to the downside to the point that many are extrapolating to.

Bitcoin is likely to continue in the direction of its previous trend, which is downward. The cryptocurrency has slipped by almost 50 percent from its year-to-date peak of approx $14,000. It has now spent 173 days in a downtrend. The move downhill, therefore, has stopped looking like a bearish correction after bitcoin’s supersonic price rally of 260 percent earlier this year. 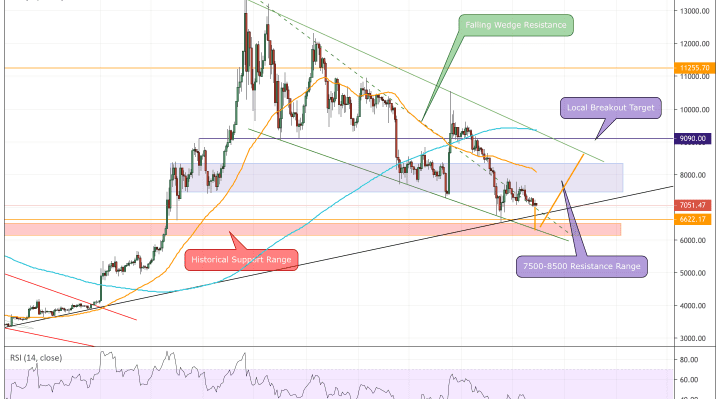 The red area serves as the next price target for bears | Source: TradingView.com

The cryptocurrency is now trending downwards in what appears like a Descending Channel. That being said, it is forming fresh lower lows and higher lows since June 26. The price action now appears to extend itself further.

Bitcoin, therefore, is eyeing to establish another lower low towards the support of the Descending Channel. The same level coincides with the historical support/resistance range defined by $6,000-6,5000. Traders could exit their Long positions under the influence of that redded area. Such a move would crash bitcoin at least towards $6,500, with an extended price target sitting near the $6,000 level.

The $6,000-6,500 range also serves as an ideal place for traders to accumulate bitcoin. With respect to the prevailing Descending Channel formation, an accumulative behavior could take bitcoin towards the upper trendline – way above the $7,500-8,500 resistance range in purple.

In the medium-term, the price action could continue inside the Channel. Nevertheless, the direction of bitcoin’s next big move remains unpredictable. A break below the red area could have the cryptocurrency test $4,500 as its next downside target. Meanwhile, a break above the Channel Resistance could have it test $9,100 as an interim upside target.