Bitcoin, Ethereum Forecast: Near-Term Correction or Will the Bubble Burst?

The cryptocurrency market has come under intense fire over the past few days, with Ethereum and bitcoin both dropping lower as the risk aversion wave weeps across major financial markets. While the long-term outlook for cryptocurrencies is skewed to the upside, more losses are highly likely in the next few days.

Following are some of the important technical levels to watch out for ETH and BTC in the next few days as Gold Price Forecast Stalled By Spike In US Treasury Yields. 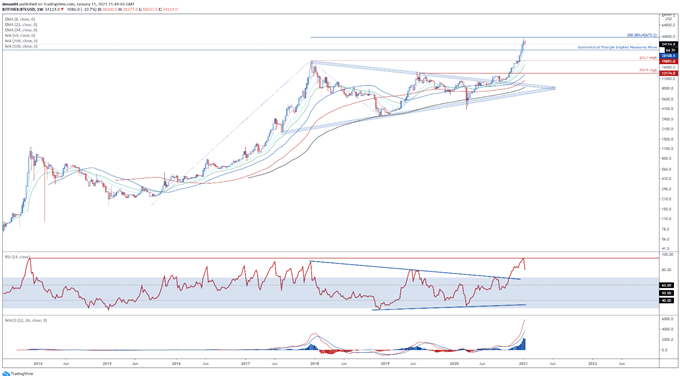 Bitcoins whopping 949% rise from march 2020 seems to be running out of momentum, as the price starts to form the bearish Hanging Man reversal candle at the key resistance at 42,673 Fibonacci (200% expansion).

With the Relative Strength Index significantly U-turning at the highest weekly oversold zone from 2013, the prices are substantially tracking over the 8-week exponential 28108 Moving Average (MA), a more aggressive rebound seems likely in the short term.

Failure to gain a strong foothold over last week’s 38,200 will most likely open doors for the resellers to drive prices back to the immediate support at $30K. Clearing this might pave way for a push towards former resistance that turned to support at 19,891 (2017 high).

Also, the weekly close over 200% Fib, signals the emergence of the main upside trend and produces an impulsive uptrend push to challenge the former $50K mark. 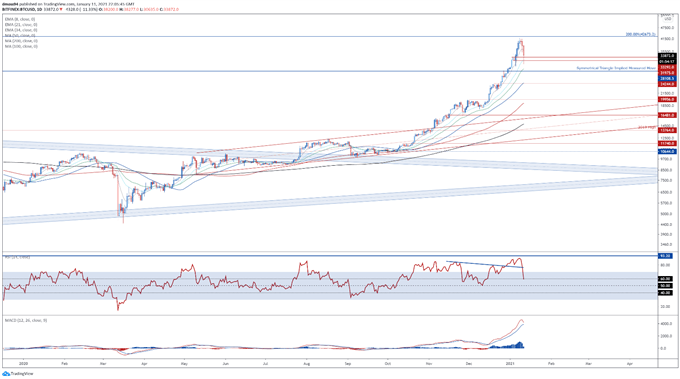 A closer look into the daily chart further reinforces the bearish outlook showed on the weekly chart in the short term, as the prices drop below 36,318 8-day EMA and $35K mark.

With the relative strength index dropping back under 70, and the MACD targeting the bearish cross under its ‘slow’ signal line peer, the least resistance path is skewed to the downtrend.

Breaking the support zone between 31,975 and 33,290 will most likely neutralize the short term buying pressure and produce the push to also test the confluent support at 34-day EMA as well as 28,540, which is the monthly lower. The daily close under the likely support starts at 24,244 (December 2020 high) into crosshairs.

On the other hand, remaining perched constructively over 32020, 21-day EMA will drive the pullback towards 41,969, the yearly high.

Also, Ethereum’s 1407% rise from 89.66 (March 2020 low) also seems to be in jeopardy as the prices formed the bearish Hanging Man reversal candle around the confluent resistance at Pitchfork parallel as well as a record set at 1424 back in early 2018.

Essentially, the failure of price to push to new highs shows that a Double Top reversal pattern might be on the cards.

Dropping back under February low will most likely precipitate more downside rally to the 50% Fib, with a notable break below likely to bring a pitchfork media and 61.8% Fib.