Bitcoin prices continued their plunge this Friday in the face of a global market dive led by the spread of Coronavirus (COVID-19) in and outside China.

The so-called “digital gold” typically rises in times of a global crisis as drops in the stock market tend to lift investors’ haven sentiment. But it lost its virtual shine earlier this month and closely followed global risk-on assets into registering historical losses.

So it appears, bitcoin became one of the assets of choice to obtain cash after benchmark indices in the US, the Europe, Canada, the Middle East, and Asia suffered huge losses. Investors decided to profit-take whatever the cryptocurrency has returned over the past three months. 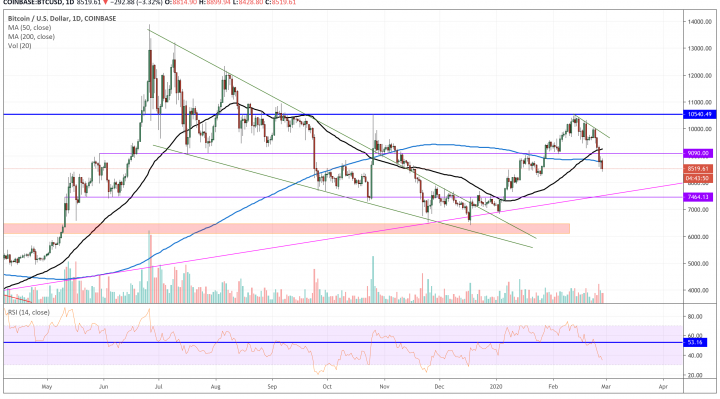 At one point, the bitcoin price was trading at $8,428, down 19.90 percent from its year-to-date high. The sizeable drop further established the cryptocurrency’s worst weekly performance since November 2019.

A similar sentiment engulfed bitcoin’s traditional cousin, Gold. The precious metal, despite being a go-to haven for mainstream investors, plunged surprisingly this week, indicating that traders were withdrawing their excessive positions on interim profits. Other commodities, including Silver, also dived in a similar fashion.

It was a bizarre week for every big market as investors capitulated en masse from every known market. Assets like bitcoin and gold served more profitable opportunities, for their upsurge over the past two months was more attractive than stocks. But taking a good look at the picture, one can see a potential bullish rebound.

That is because of central banks. The Coronavirus fears could prompt them all to introduce a wave of stimulus programs. They may include rate cuts, quantitative easing, as well as fiscal measures like massive government-funded programs. Assets like bitcoin and gold could rise in a low-interest market.

But until then, the plunge may continue. Jeff Morris Jr, the found of Chapter One, explained:

“As currencies destabilize in virus countries, Bitcoin is a safe haven. [Also], Paper money spreads germs – another +1 for [the] digital currency. Centrals banks may move towards quantitative easing – bullish for BTC.”