Bitcoin Ducks Gold Correlation to Fall Alongside US Stocks

A fresh round of selling action rippled across the bitcoin markets on Tuesday as big economies issued a stark warning about the Coronavirus epidemic.

The leading cryptocurrency fell sharply, giving up part of its 2020 gains on a day that saw traders’ bearish sentiment increasing. The bitcoin-to-dollar exchange rate on spot markets plunged by 4.12 percent to establish an intraday low of $9,265. Meanwhile, CME futures linked to bitcoin also slipped by 4.36 percent, marking its biggest weekly slide since November 2019. 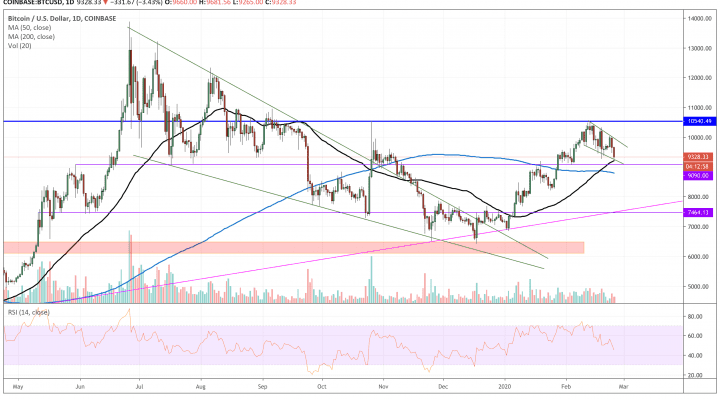 As bitcoin dropped, the US stocks also showed similar downside sentiments. Wall Street’s three main indices each slipped hugely after the US government warned people about the increasing number of cases related to Coronavirus in the country. The S&P 500 index, for instance, declined by 1.9 percent post noon.

Gold too slipped by 0.62 percent as invested shifted focus on more attractive US Treasuries. The yield on the benchmark 10-year bond fell by 1.31 percent.

But against safe-haven assets, investors treated bitcoin and stocks as their risk-on markets. The sentiment came in contrast with bitcoin’s growing correlation with Gold at the beginning of 2020, especially after the US killed an Iranian military official in an airstrike. But now, the relationship appeared as if it is breaking.

Bitcoin’s downward sentiment followed growing narratives about how investors were buying it as an insurance asset against Coronavirus. Global media reports covered by Bloomberg, Guardian, Forbes, CNN, and others further discussed the possibility of bitcoin behaving like “digital gold.”

The narrative is now breaking. Following the bitcoin’s latest fall alongside global stocks, some prominent experts highlighted the cryptocurrency’s ambidextrous nature. Alex Krüger, for instance, earlier highlighted bitcoin’s growing proximity to Gold but later called it an asset that is unreliable and “does its own thing.”

Chart shows prices of US tech stocks, US treasuries, gold and bitcoin during the current round of panic.

Three of these are strongly correlated during times of stress. The fourth does its own thing.

The chart illustrates how unreliable bitcoin correlations with risk assets are. pic.twitter.com/NDhvvBsnex

In totality, technical factors remained as the only convincing catalysts that moved bitcoin prices either way. Days traders on Twitter noted that the cryptocurrency surged by more than 32 percent heading into 2020, so a little bearish correction looked normal.

“No fear for me at this point,” said day trader Michaël van de Poppe. “Holding above $250-265 billion [market cap] and we’re still fine for further upwards momentum. Given that the sentiment is bearish and people area feared, I assume we’ll not be seeing any deeper retracements.”

As of now, bitcoin is testing its 50-daily moving average (blacked wave in the chart below) as support. At the same time, the potential of an upside retracement has maintained resistance around the $10,000-10,540 area.