Bitcoin failed to close above a key resistance area near $10,500 last week. The cryptocurrency later corrected hugely to the downside, falling below $9,500 on Monday. But the depressive price action did not deter it from confirming a fresh wave of buying sentiment.

The bitcoin market entered new bullish territory this Tuesday as it formed a Golden Cross – an upside continuation pattern that occurs when an asset’s short-term moving average jumps above its long-term moving average. Experts believe its formation in an already bullish bitcoin market would assist the cryptocurrency in registering new yearly highs. 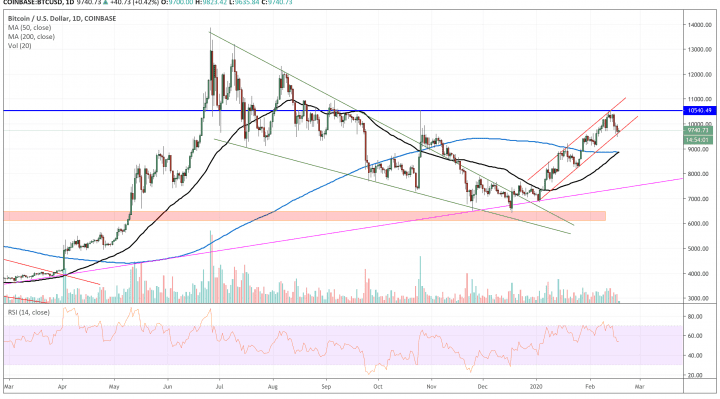 The upside sentiments took its cues from previous Golden Cross occurrences. In April 2019, for instance, bitcoin jumped by more than 170 percent three months after it formed the bullish candlestick pattern. Analysts think the cryptocurrency – at least – could preserve the custom after the current Golden Cross formation.

With a potential golden cross playing out in bitcoin charts in the next week or so, @coingecko's @bobbyong is very bullish on where markets will go from there.

Nevertheless, some doubt the optimistic narrative. Day trader Shitcoin Riddler was quick to comment that not every Golden Cross formation has sparked a fresh bitcoin buying enthusiasm among traders. He wrote:

“If we take the past odds and project it into the future, there is a 55% chance for $BTC to act as “expected” on the golden cross event. golden/death cross events don’t have a significant impact on bitcoin‘s price. People just try to fit coincidence in their bias.”

Bitcoin is in a clear uptrend ever since it retraced from a local bottom of $6,430 in December 2019. The cryptocurrency’s parabolic rally has appeared against influential catalysts such as the US-Iran geopolitical conflict and the Coronavirus epidemic in China.

Global media has covered the issue in detail, showing how institutional investors are testing bitcoin as an experimental hedge against the ongoing macroeconomic crisis. They noted how central banks are doing nothing but injecting new money into the system, making every asset around it more expensive. Bitcoin – like Gold – is going up, as a result.

Bitcoin is so much more than just a currency. It's a completely new social technology: non-political non-confiscatable self-sovereign extra-hard money. I expect it to precipitate transition of humanity to completely new economic and social order that will slowly emerge over time.

Bitcoin’s recent 10 percent occurred after it had surged by over 60 percent in just about two months. That appears like a natural correction – a hiccup before the cryptocurrency continues its uptrend. Not to mention, risks of deeper declines remain higher as long as it flips $10,500 from resistance to support.

Golden Cross, for now, confirms that the bitcoin price could explode in the coming sessions.