Bitcoin corrected below $8,000 on Thursday as Donald Trump backed away for pursuing military action against Iran.

The leading cryptocurrency established an intraday low of $7,845 ahead of the New York evening session. Traders who had weighed possibilities of bitcoin rising against a full-fledged geopolitical crisis in the Middle East started exiting their bullish positions soon after Trump’s press conference. 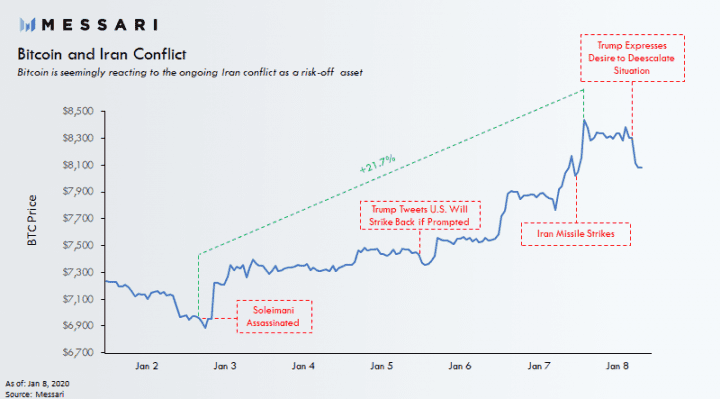 Bitcoin price against the developments in the Middle East | Source: Messari.io

Trump’s desire to deescalate the conflict had an impact on the entire haven-asset class. Like bitcoin, Gold closed the day in a negative area, down 1.14 percent to trade at $1,556.10 an ounce on the Intercontinental Exchange. Similarly, Brent crude plunged by 3.55 percent.

Bullish All The Way

Bitcoin’s close proximity to the price movements in globally recognized haven assets led speculators to believe that the cryptocurrency is itself becoming one.

The Iran situation visibly boosted bitcoin’s demand, which was similar to its performance against other geopolitical and economic issues. They include Q2/2019’s 170 percent growth against the US-China trade war and October’s gains against no-deal Brexit. Heading into 2020, the cryptocurrency is still retaining some of those conflicts in its long-term bias.

Then there is the Federal Reserve’s monetary expansion that is promising to boost demand for safe-haven assets. The US central bank has inflated its balance sheet to an all-time of $4.5 trillion, with $400 billion worth of credit entering banks in recent months.

The expansionary sentiment has led the leading US stock indexes to register their best performances. Investors’ appetite for risk-on is likely to remain the same as long as the Fed is willing to flow its credit via short-term “repo” operations and outright purchases of U.S.Treasury bills.

Nevertheless, havens like bitcoin and gold could benefit the most once the central bank puts a break on its pseudo-quantitative easing program. Bitcoin particularly is riding high on an upcoming “halving” event that would reduce its supply rate from 12.5 BTC per 10 minutes to 6.25 BTC per 10 minutes.

The Turn repo rate dropped another 75 bps from 2.75% down to 2.00%, confirming that dealers had lost all fears of a year-end funding squeeze. Needles to say that now the entire financial system is living on FED generosity. So get a good seat, buy #bitcoin and enjoy the show. pic.twitter.com/CO6i5L8Esv