Bitcoin Hits $10,500 Ninety Days Ahead of Its Block Reward Halving

Bitcoin closed above the $10,000 level for the second time this week as traders assessed the asset’s bullish potential ahead of its block reward halving.

The bitcoin-to-dollar exchange rate established a fresh year-to-date high at $10,500 this Thursday. The upside move brought the pair’s net yearly gains up by 46.53 percent, making it one of the top-performing assets heading into 2020. Nevertheless, bitcoin corrected as the session matured by more than $200, albeit maintaining a solid footing at $10,000. 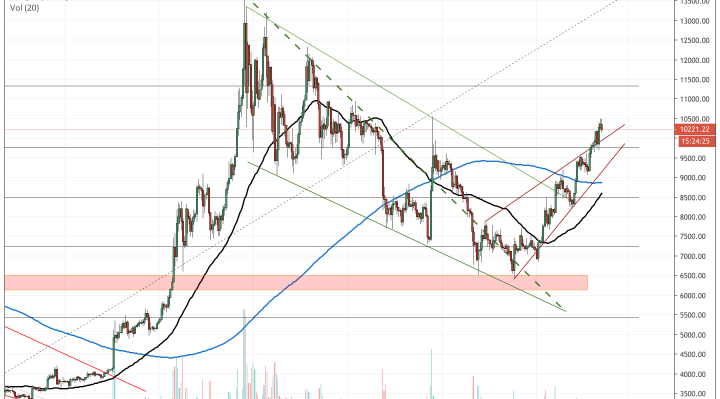 Bitcoin’s push towards $10,500 also came ninety days ahead of its upcoming halving. The event, scheduled for May 2020, would reduce bitcoin’s daily mining reward from 1,800 BTC to 900 BTC. Experts think halving could shoot the cryptocurrency’s prices upward based on two similar events in the past that followed surplus gains in the bitcoin market.

Nevertheless, a section also believes that speculators are hyping-up bitcoin’s scarcity effect on prices, given a reduction in supply does not guarantee a boost in demand.

Morgan Creek Digital co-founder and partner Jason Williams said last year that halving could make mining costlier, explaining that they would need to sell a large chunk of their bitcoin rewards. Meanwhile, there is no guarantee that there would be buyers to participate in those big sales.

“New buyers have to come in to move this market up,” he said. “So other than a new headline, the halving is being dealt with now by those who are operationally effected by it. Those that don’t will be priced out of the mining business.”

According to a string of bullish analysts, bitcoin’s demand is heading upward ever since the beginning of 2020. Alex Krüger stated earlier that geopolitical tensions between the US and Iran earlier sent investors looking for perceived haven assets. Around the same time, the bitcoin price exploded in tandem with Gold, Japanese Yen, and other hedging assets.

13/ This is how bitcoin traded the Iran events. Notice the lag. Lag = Opportunity ? pic.twitter.com/bSK7DxlhRz

Demand for the cryptocurrency further surged in February with investors’ appetite for risk-on assets. The Coronavirus outbreak in China that killed more than 1,000 people and infected around 40,000 more around the world led global equities to record lows. That prompted central banks to inject fresh cash into the banking system.

Is #Bitcoin about to hit a golden cross?

See why @MatiGreenspan believes it could happen as soon as this week and $BTC could continue its upward trajectory. https://t.co/7PWpa46pFH pic.twitter.com/d7dbI80guD

Prominent analyst Mati Greenspan said that a part of that cash went into bitcoin and the rest of the cryptocurrency market. Investors affected by the untimely market close in China, as well as the restriction on sell-orders, preferred to pump digital assets in addition to equities.

The correction in bitcoin prices now serves as a breeding ground for another upside push. According to full-time trader Josh Rager, the cryptocurrency could get as high as $11,400 to $11,550 before topping out.

“I’ll stay in spot positions until then and likely hedge short,” he added.