Billionaire hedge fund manager Paul Tudor Jones announced Monday that he has allocated “just over 1 percent” of his portfolio to Bitcoin.

The Tudor Investment Corporation’s founder & CEO, who manages a $38.39 billion hedge fund told CNBC Squawk Box that his decision to foray into the world’s leading cryptocurrency came from his fears of currency inflation. Praising bitcoin for its potential store-of-value features, Jones said he would hold a “tiny percent” of it because it is “a great speculation.”

“Bitcoin has not stood the test of time, for instance, the way gold has,” the veteran investor added.

Jones’ announcement followed a modest spike in the bitcoin price early New York morning. The cryptocurrency surged 8.26 percent, or $700, in just three hours but gave up part of its gains to short-term profit-taking. It had fallen by almost 20 percent during the weekend after piercing above $20,000 on Friday. 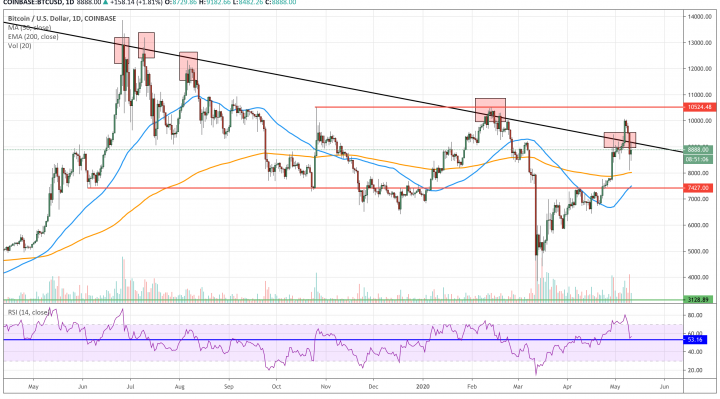 The downside correction also appeared owing to a long-term technical resistance, as shown in the chart above. Bitcoin failed to hold the Descending Trendline as support and fell sharply upon testing it – just like in the fractals from early 2019 and overall 2020. The technical indicator alone pointed at a deeper correction that could take prices down to as low as $7,500.

But bearish fractals did not bother BTC bulls. Many of them to their Twitter pages to convey their euphoria about Jones’ entry into the cryptocurrency sector. Morgan Creek Digital Assets’ co-founder Anthony Pompliano called Jones “an absolute legend of Wall Street,” adding that he would bring more big investors to the Bitcoin space.

“The digitization of the world clearly benefits bitcoin”

An absolute legend of Wall Street is going to push hundreds of thousands of people who watch @SquawkCNBC to go educate themselves on Bitcoin. pic.twitter.com/GzOHx5dyAM

Scott Melker, a prominent cryptocurrency analyst, also noted that Jones’ involvement in the Bitcoin sector is massive, even though his investments stand limited.

“He gets it,” Melker tweeted. “2 percent exposure to Bitcoin. Massive for someone at his level.”

The euphoria also preceded bitcoin’s scheduled technical upgrade on May 12 that will cut its daily supply rate from 1,800 BTC to 900 BTC. The third “halving,” as investors believe, would shoot the bitcoin price upwards like the earlier two events. A price prediction model predicts the cryptocurrency to hit $100,000 by 2021.

The macro environment just makes sure *more* people consider Bitcoin than would have otherwise. While many believe Bitcoin's cycles are lengthening, this one may be faster than expected.

Strap in – the only guarantee is that there will be gut-wrenching volatility ahead!

The BTC/USD price was trading near $9,000 at the time of this publication.

Photo by Vivek Doshi on Unsplash