Ripple’s XRP Up More than 20% as Bitcoin Loses Shine

Ripple (XRP) was among the biggest gainers on Wednesday as the kingpin bitcoin struggled for direction.

The third-largest cryptocurrency by market capitalization surged by 6.05 percent to $0.3029 past Shanghai noon session. At its intraday high, XRP was trading at $0.3137, up by more than 22 percent on a week-to-date basis. Elsewhere in the cryptocurrency market, almost all the top altcoins fared well, with the second-largest Ethereum jumping 7.18 percent and Stellar by more than 16 percent. 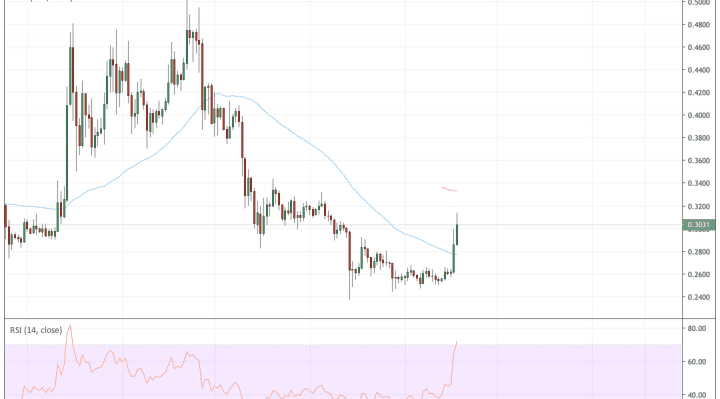 Nevertheless, the rise in the XRP price surprised the most. The Ripple blockchain token has been under severe pressure all this year. It witnessed a sharp 80 percent drop against bitcoin, prompting onlookers to believe that investors are losing interest in the cryptocurrency. The latest surge serves as a reminder that XRP still has some fuel left to start another price rally.

But XRP is not rising owing to idiosyncratic factors. The cryptocurrency has surged at the time when bitcoin’s impressive uptrend this year is hinting to come to a halt. The benchmark cryptocurrency is trending sideways while showing its lowest volatility since May. Investors/speculators that are looking for some action may find bitcoin annoying. So a shift to altcoins like XRP seems like a better option – it’s a guess.

“I don’t think it’s a bad time to Long XRP,” said prominent cryptocurrency analyst/trader Crypto Michaël. He studied the altcoin’s chart against BTC and figured that it could quickly surge towards the 4,064-4,663 sats range. At the time of this writing, the XRP-to-BTC exchange rate was 2,990 sats.

The divergences are still in play and slight breakout here.

XRP’s price rally this week also came on the sidelines of an ongoing class-action lawsuit filed against its issuing company, Ripple Labs. Plaintiffs are investors who accuse Ripple of selling them unregistered securities in the name of XRP, a token that works as a bridge between cross-border fiat conversions. The ongoing case would determine whether XRP is a security or a utility token. Judgment against Ripple Labs could harm the prices of XRP, a reason why investors have lately maintained distance from it.

Then, there is a fight brewing within the Ripple community. One of the followers, named Crypto BitLord, started a petition on Change.org, requesting Ripple not to dump XRP anymore. The demand followed the release of Ripple’s fiscal quarter reports that showed the company selling billions of dollars worth of XRP for forging banking partnerships and funding operations.

“Now we need over 10k signatures to help support the cause and stop the price decline,” the petition read. “If they stop selling, its more likely the strong demand for this quality coin will naturally pump the price back to ATH and beyond!”

The movement has received support from more than 3,600 people already.