The Turkish lira is crashing against its US peer to start the trading week, driven by the ousting of Naci Agbal, the head of the central bank. Following last week’s meeting, where policymakers further tightened monetary policy, President Recep Tayyip Erdogan terminated Agbal, despite only serving four months on the job. Domestic markets are in freefall on the news.

Last week, the Monetary Policy Committee (MPC) raised the benchmark one-week repo rate by 200 basis points to 19%, higher than the median estimate of 100 basis points. Officials wanted to increase rates because of inflation hitting a 20-month high of more than 15% and growing concerns of price destabilization.

Financial and forex markets celebrated the news, with the lira renewing its bull run that started in November. But President Erdogan was not pleased by the decision.

In an overnight decree on the weekend, the president announced that Agbal would no longer carry out his four-year term. While no justification was made by the Erdogan regime, the two men hold contradictory views on policy, which could have led to Agbal receiving a pink slip. Erdogan wants low rates to spur growth, while Agbal advocated higher rates to curb inflation.

Finance Minister Lufti Elvan tried to assure investors that Ankara was still pushing ahead with free-market reforms and a more liberal exchange-rate policy. But considering Agbal’s replacement, traders were not buying the message.

Erdogan chose Sahap Kavcioglu as Agbal’s successor. Kavcioglu is a banking professor and a columnist for a pro-government newspaper who has supported low rates and slammed the institution’s current measures. He wrote last month:

The central bank shouldn’t insist on high interest rates. When interest rates in the world are close to zero, raising interest rates here won’t solve our economic problems. To the contrary, it’ll deepen them in the period ahead. 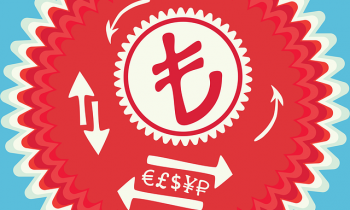 And this is why the main stock exchange plummeted by more than 9%, and the lira cratered as much as 15% against the greenback and the euro.

On the data front, according to the Ministry of Culture and Tourism, the number of foreigners visiting Turkey plunged 68.96% year-over-year to just under 538,000 people in February. The steady decline in the summer has been attributed to the international pandemic and the coronavirus-related lockdowns and closures.

Does this spell the end to the lira’s ascent?