US oil broke above the area of interest around $25 per barrel then hit a high of $29.20 per barrel before retreating. Price could draw support from nearby Fibonacci retracement levels.

In particular, the 38.2% to 50% levels could keep losses in check as it lines up with the area of interest. A larger correction could last until the 61.8% level at $23.15 per barrel, but a break below it could set off a slide to the lows near $19.50 per barrel again.

The 100 SMA is below the 200 SMA to indicate that the path of least resistance is to the downside or that the selloff is more likely to resume than to reverse. Price has climbed above the 100 SMA as an early indication of bullish pressure but has yet to test the 200 SMA dynamic resistance.

Volume is starting to edge lower to confirm that a correction is going on. Market interest could pick up once more as the uptrend resumes. ADX is still above 25 to show that trending market conditions could persist. Stochastic is heading lower for now, so price could follow suit as sellers have the upper hand. 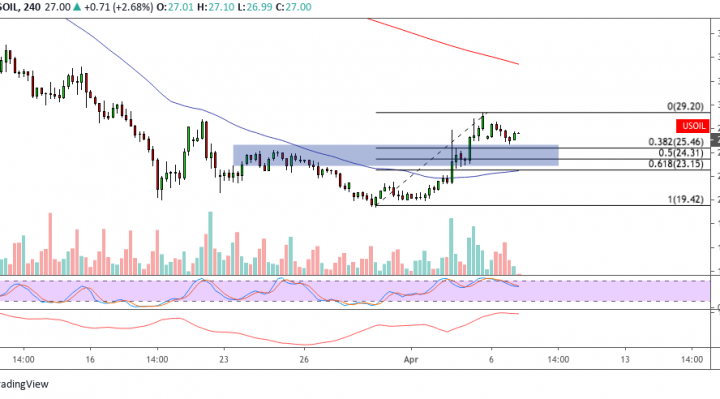 Crude oil enjoyed a strong rally late last week as Trump hinted that talks with Russia could pave the way for a global output deal. However, there have been indications that talks could be postponed and that Saudi Arabia still refuses to make concessions.

The possibility that an agreement could be reached might still prop crude oil prices higher, but negotiations breaking down could drag the energy commodity further south. After all, demand is already weighed down by the coronavirus outbreak keeping trade and travel restrictions in place.

With that, worsening headlines on the contagion could keep a lid on crude oil while increasing market hopes that stimulus efforts could limit the economic repercussions might spur more gains.