A Weaker Euro Could Send Bitcoin Lower This Week: Analyst

A weakening Euro may leave Bitcoin under a similar downside risk as the cryptocurrency opens in the green area Monday.

According to Michaël van de Poppe, a cryptocurrency market analyst, if the EUR/USD corrects lower this week, then safe-haven assets, including Bitcoin, Gold, and Silver, may also fall in tandem. Excerpts from his tweet published late Sunday:

“The upcoming week I’m heavily interested to see how EUR/USD is going to act. If that is going to correct since the rejection at 1.19, I’m assuming we’ll see corrective movements on BTC, XAG, and XAU too.”

The analogy attempted to locate a short-term positive correlation between the said assets. So it appears, Bitcoin, Gold, and Silver rose in tandem during the second half of July on a weakening US dollar demand. As they inched towards their year-to-date high–with Gold even closing-on towards its record top–the greenback fell to its 2018 low. 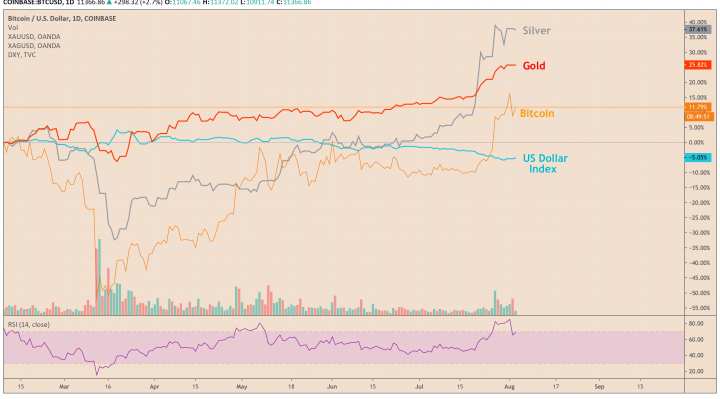 Safe-haven assets – Gold, Silver, and Bitcoin – against the US dollar index. Source: TradingView.com

The weakness in the US dollar index, which represents the greenback’s strength against a basket of foreign currencies, also pointed to an increase in bids for safe-haven assets. That also included Euro, a pan-European currency which rose by 10 percent to its two-year high against the dollar.

But entering the new week, almost all the bullish assets are showing signs of upside exhaustion.

Bitcoin underwent a pump-and-dump during the weekend, crashing by as much as 13.90 percent hours after establishing a YTD top above $12,000. Gold reached towards $2,000 but was already pulling back ahead of the European trading session Monday.

Euro was in a similar pullback trend. The EUR/USD pair closed Friday 0.58 percent lower – the same day it settled a YTD high at $1.19. Analysts at FXStreet noted that Euro might fall towards $1.16 this week to retest its 10-day simple moving average.

Mr. Poppe, meanwhile, noted that a correction across Bitcoin, gold, and silver, will not necessarily extend into a full-blown bear run. The analyst highlighted them as “healthy, corrective movements” that occur after every parabolic upside move.

The upcoming week I'm heavily interested to see how $EUR / $USD is going to act.

If that is going to correct since the rejection at 1.19 I'm assuming we'll see corrective movements on $BTC, $XAG, and $XAU too.

Further signs of bullish momentum also came from the US dollar’s bearish outlook this week. Analyst Dmitri Zabelin of DailyFX wrote in his weekly analysis that the greenback risks correction due to the Federal Reserve’s easing policy decision and better-than-expected economic data.

Should the dollar stay weak, it may help Euro, Bitcoin, gold, and silver locate a concrete support level on their downside corrections.