AUD/USD Fails To Extend Gains Above 0.6400 Despite Mixed US Data

The AUD/USD currency pair on Friday failed to hold gains above the 0.6400 key level despite another series of mixed data for the US market. The currency pair had temporarily pulled back to bounce off the trendline support at 0.6271.

However, Friday’s rally ended prematurely at around 0.6366 in the early hours of the US trading session thereby failing to restest weekly highs of 0.6441. The pair pulled back before venturing into overbought levels of the 14-hour RSI in the 60-min Chart. It is now pinned just above the 100-hour SMA while the 200-hour SMA is a few pips below.

From a fundamental perspective, the AUD/USD currency pair is trading at the back of a relatively busy period in the US market. On Tuesday, the US Export Price Index for March beat the (MoM) expectation of -1.9% with -1.6%. Import Price Index for the same period also impressed with -2.3% versus -3.2%.On Wednesday, US core retail sales beat the (MoM) expectation for March with -4.5% versus -4.8%. General Retail Sales missed -8% with -8.7% while the Industrial Production change of -5.4% was worse than the expected change of -4%.

On Thursday, the US initial jobless claims came higher than expected at 5.245M versus 5.105M.  Housing starts for March also missed 1.3M with 1.216M while building permits impressed after beating 1.3M with 1.353M. The Philadelphia Fed Manufacturing and the NY Empire State Manufacturing Indexes also missed estimates during the week. In Australia, an employment change of 5.9k was better than the expected change of -40k. The unemployment rate of 5.2% was also better than the consensus estimate of 5.5%. 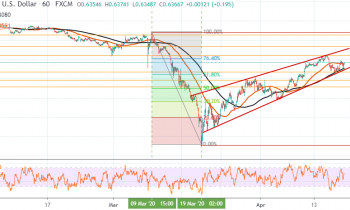 Technically, the AUD/USD currency pair appears to be trading under considerable short-term bullish bias in the market sentiment. The pair recently pulled back off from the verge of crossing to overbought levels. It is currently pegged between the 100-hour and the 200-hour SMA lines in the 60-min chart. 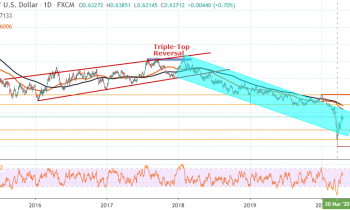 In the daily chart, the AUD/USD currency pair appears to be trading within a descending channel. This indicates a long-term bearish bias in the market sentiment. The pair’s recent rebound has pushed it closer to overbought levels of the 14-day RSI.