The AUD/USD currency pair on Friday retracted from the daily highs of about 0.6857 to settle around 0.6830 after the latest round of US non-farm payrolls. The currency pair has been trading in a cyclical consolidative pattern since breaking out from a downward trending wedge at the start of the week.

The pair made a bullish breakout that resulted in one of the biggest single-day rallies in recent months. This rally pushed it to overbought levels of the RSI indicator in the 60-min chart but has since pulled back to trade within the normal trading zone.

From a fundamental perspective, the AUD/USD currency pair is trading at the back of a very busy period in both the Australian and the US markets. Besides the recent positive developments around trade talks with China, today we also saw the release of the NFPs.

And according to the data published on Friday, the US labor market added a whopping 266k jobs during the month of November, which beat the expectation of 180k jobs. On the other hand, wage growth eased to 3.1% (YoY) from 3.2% in the previous month, but still, beat the consensus estimate of 3.0%.

In Australia, the Reserve Bank of Australia (RBA) on Tuesday kept the cash rate unchanged at 0.75% but analysts expect a cut soon in a bid to boost economic growth. The Q3 GDP also missed the expectation of 0.5% (QoQ) after dropping from 0.6% to 0.4%. 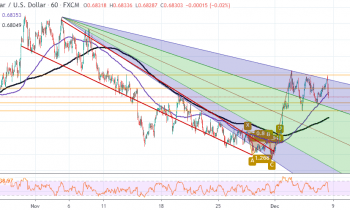 Technically, the AUD/USD currency pair appears to have met strong resistance around the 0.6860 level. The currency pair bottomed at around 0.6760 last week but has since rallied to top 0.6860 before Friday’s post-NFPs pullback. 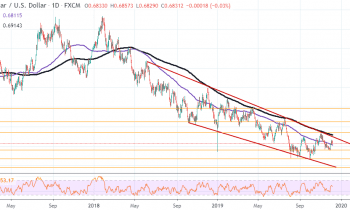 In the daily chart, the AUD/USD currency pair continues t trade within a descending channel, which indicates a significant bearish bias in the market sentiment. The pair is pegged just above the 100-day SMA line and a few more pips below the 200-day SMA.