What started as a bullish year is ending on a cautionary note for bitcoin. The cryptocurrency had registered more than 250 percent in profits until June 2019. Nevertheless, it failed to sustain its upside bias as large selling actions brought its price down by up to 53 percent as of December 18.

The result is a conflicted market that does not which way it wants to go next. Some investors remain bullish owing to a well-circulated halving event. The May 2020 phenomenon would see the supply of bitcoin getting reduced by half. Bulls think it would magically grow the cryptocurrency’s value to $40,000 or beyond. Some even predict a six-figure valuation for the cryptocurrency.

However, Joe Wisanthal of Bloomberg has a conflicting opinion. The business editor wrote in a newsletter that Bitcoin Halving could do a complete opposite of what bulls think: Crash the market.

Mr. Wiesenthal, who has been a vocal critic of the ongoing Bitcoin jingoism, discussed a What-If event related to the cryptocurrency. He said that if the Bitcoin Halving does not result in a bull run, then investors might start losing their minds. The result would be a massive selling of the cryptocurrency. The move, of course, would bring the prices down.

“What many people see as a bullish catalyst could end up as a bearish one,” noted Mr. Weisenthal.

From the @markets newsletter:

This is why the upcoming Bitcoin halving in May 2020, could lead to a plunge in price. https://t.co/e5TYtjIuOw $BTC pic.twitter.com/vVvPCvg5tO

The comments follow a similar move noted in the Litecoin price after its halving. The altcoin, too, registred quadruple gains months ahead of its supply rate slashing event. But as the date came near, the Litecoin-to-dollar exchange rate had lost up to 20 percent of its value. 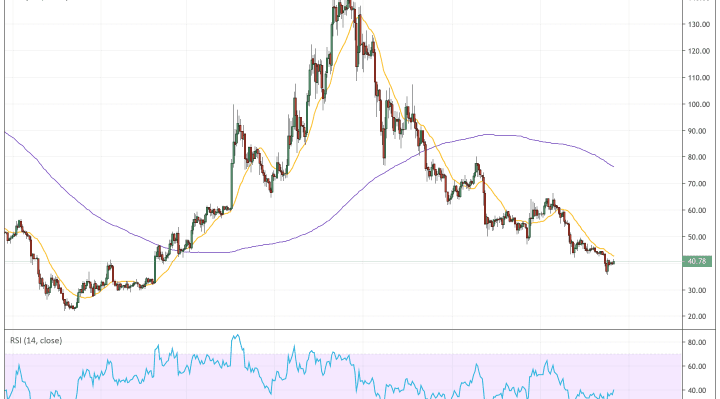 Litecoin price plunged by $63 since the day of halving | Source: TradingView.com, BitStamp

Even after going through halving on August 2, the pair remains in a downtrend. It is now down by more than 62 percent.

No Demand in Sight for Bitcoin?

What happened in the case of Litecoin served as a possibility of what could happen to Bitcoin. Jason Williams, the co-founder at Morgan Creek Digital – a digital asset fund, iterated the same, saying that halving could turn into a non-event.

Bitcoin halving in May 2020 won’t do anything to the price. It will be a non-event.

Some believe that the bitcoin gains recorded during the first half of 2019 might have been the ones that came on halving hype. That said, the market has already factored in the supply cut hype, and is now merely neutralizing the overbought sentiment with a massive downside correction.

More so, the supply-demand factor works only when there is an increase in demand against an asset’s supply rate. Lately, bitcoin has come under pressure as a growing strain of central bankers, politicians, and lawmakers have expressed concerns over cryptocurrencies. That has kept big monies – institutional investors – out of the space.