Bitcoin price is trending higher on its 4-hour time frame and is establishing an ascending channel. Price recently broke above a tight consolidation pattern, signaling that buyers are taking control of price action. BTCUSD has yet to make it to the top of the channel around the $1000 major psychological level.

RSI is indicating overbought conditions and appears to be turning lower. Bitcoin price could follow suit and move down as soon as the oscillator heads south. Stochastic is also in the overbought zone, which means that buyers are running out of steam, but the oscillator hasn’t turned lower to indicate a return in selling pressure just yet. The next levels to watch are $1000 and $950. 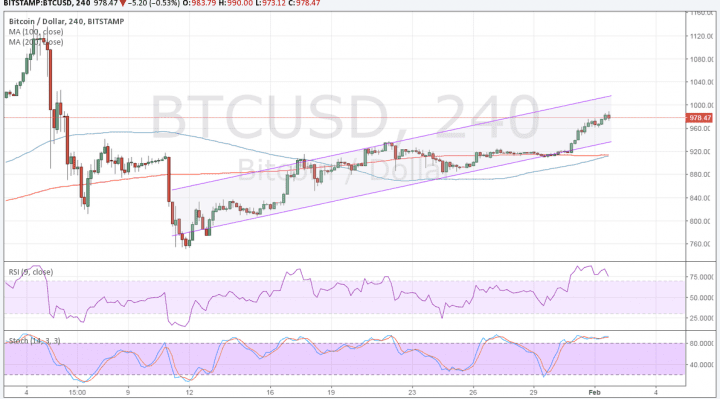 Bitcoin has been able to take advantage of dollar weakness in the past few days, as investors seem to be feeling the unease surrounding the Trump administration. Just recently, the US President called out China and Japan for manipulating their currencies to take jobs and companies away from America. Apart from that, widespread protests on Trump’s Muslim ban and growing discord within the ranks in Washington is starting to chip away on investor sentiment.

To add insult to injury, the FOMC gave a cautious vibe in their latest policy statement, leading some to think that the central bank is also feeling uncertain about the government’s direction. The Fed kept rates unchanged as expected while citing that economic conditions warrant gradual tightening as risks remain roughly balanced. On a more upbeat note, they removed the reference to transitory effects from energy prices on inflation and mentioned that consumer and business sentiment have improved. Still, these didn’t seem to be enough to convince dollar traders that the Fed is on track towards hiking again next month.

The spotlight now turns to the US jobs report due on Friday as a faster pace of hiring is expected. Earlier labor market reports such as the ADP non-farm employment change and ISM surveys have suggested a pickup in employment so traders are setting the bar high. A stronger than expected read could reinforce March rate hike views and revive dollar strength against bitcoin while unimpressive results could favor the cryptocurrency instead.

Market sentiment is also on bitcoin’s side as investors seem more inclined to partake of returns in the cryptocurrency than put their money in stocks or other traditional assets. After all, geopolitical risks remain as Trump continues to antagonize Muslims and Mexicans so traders can’t help but worry about repercussions on global relations and trade. For now, it looks like the coast is clear for more bitcoin gains but profit-taking is also becoming a strong possibility in the near term.