Bitcoin is still hanging around the neckline of the head and shoulders reversal pattern visible on the 4-hour time frame. A break below this support zone could send it down by at least $700 or the same height as the chart formation, bringing price to $1700 or lower.

The 100 SMA is still above the longer-term 200 SMA on this chart but the gap has narrowed considerably to indicate that a downward crossover is in the cards. If this materializes, more bears could join in on the action and push bitcoin much lower.

However, stochastic has been lingering around the oversold area for quite some time, signaling that sellers might want to take a break and let buyers take over from here. If so, a quick pullback to nearby resistance levels around the moving averages might take place. A break past the $2600 resistance, however, could indicate that buyers have regained the upper hand.

RSI is also treading sideways around oversold levels, which reflects exhaustion among bears. Note that it’s almost the end of the month and quarter so profit-taking could happen and spur a bounce for bitcoin. 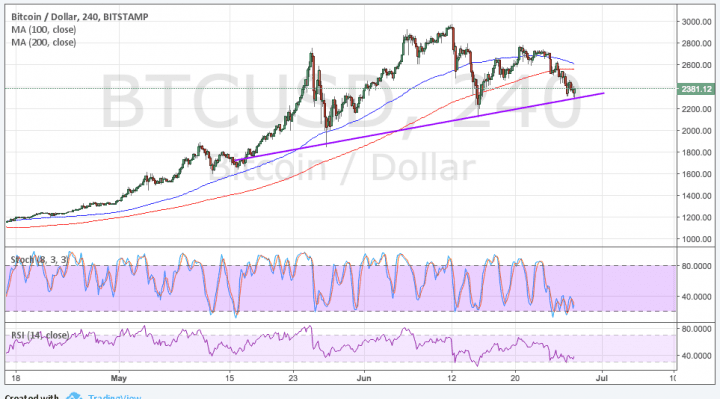 However, cryptocurrencies have been weaker these days owing to the return in risk appetite. Optimistic remarks from a good number of central bank officials are shoring up gains in global markets, leading traders to liquidate their bitcoin holdings in favor of stocks and commodities.

Apart from that, political risks seem to be subsiding as the Italian government pledged 17 billion EUR to wind up two regional banks while the U.K. government has been able to strike a coalition with DUP. This could mean smoother Brexit negotiations, at least on the home front. Also, the Trump administration is turning attention back to fiscal reform and away from the Russian intelligence information leak, easing investor concerns and shoring up US equities once more.

In contrast, bitcoin has been weighed down by bearish remarks from a handful of analysts and by the setbacks in the cryptocurrency, including the ethereum flash crash and the outages in a couple of big bitcoin exchanges earlier this month.