The bitcoin price has completed an upward breakout from a descending channel formation after bouncing off the 100-hour moving average line. The price of the pioneer cryptocurrency bottomed at about $20,000 before rallying to trade at $20,689.

The BTC/USD has now advanced to trade several levels above the 100-hour MA in the 60-min chart. As a result, bitcoin appears to be on the verge of entering the overbought zone of the 14-hour RSI.

From a fundamental perspective, bitcoin is trading at the back of a relatively busy period in the global markets. Earlier this week, the UK’s Conservative Party voted in its newest leader Rishi Sunak, who previously served as Chancellor to the Exchequer. Sunak has been one of the most pro-crypto UK leaders ever, and his appointment as the Prime Minister of the country was received positively in the crypto market. This prompted the BTC/USD’s early rise this week before pulling back on Thursday.

The bitcoin price also received another major boost on Friday after Elon Musk officially took charge of Twitter after completing the $44 billion acquisition. More importantly, Musk’s bid for the social media company received backing from leading web3 companies including Binance, which invested $500 million in exchange for an equity stake.

On Friday, Binance said it was setting up a team of experts to develop crypto and blockchain integrations for Twitter to help curb bot activity. The platform also launched Tweet Tiles in collaboration with leading NFT marketplaces to enable the purchase of NFTs directly from tweets. This boosts crypto adoption overall. 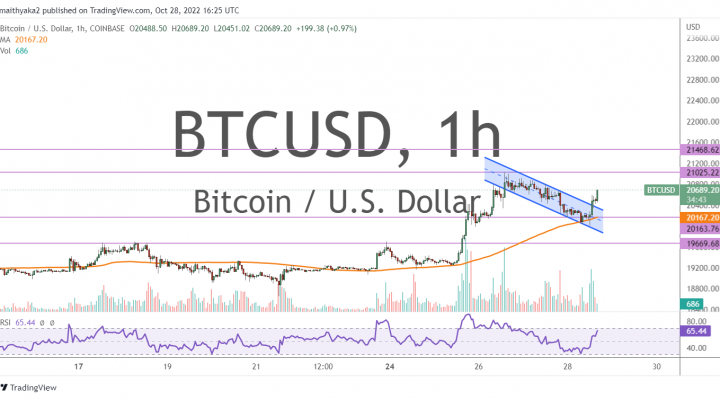 Technically, the bitcoin price seems to have recently completed an upward breakout from a descending channel formation in the 60-min chart. This indicates an attempt by the bulls to take control of the BTC price in the short term. 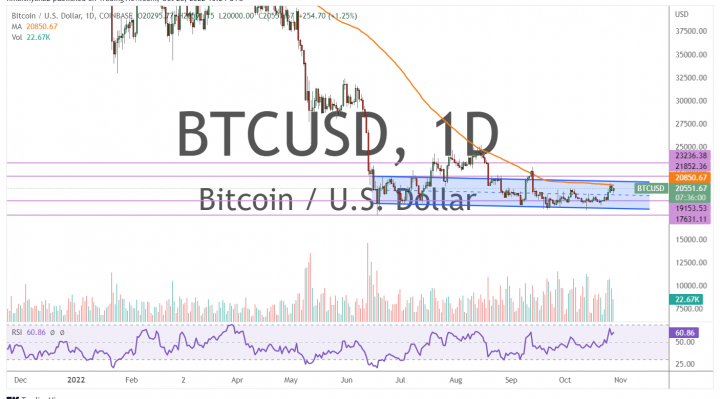 In the daily chart, the price of the pioneer cryptocurrency appears to be facing strong resistance from the 100-day moving average line. As a result, it continues to trade within a sideways channel formation.