Bitcoin prices fell on Monday as investors hoarded cash for safety against the growing impact of Coronavirus pandemic on global finance.

The offbeat asset declined by a nominal 0.5 percent but its losses appeared as a part of a wider near-term downside correction. As of 0931 UTC today, its spot rate was down by 16.81 percent from its local top of $6,990 a token. The bearish move had bitcoin break its key support level of $6,000, raising possibilities of a further breakdown heading into the European and US session.

“Bitcoin price dropped below the $6,000 support and below the diagonal support line too,” said market commentator Crypto Hamster. There were already two tests of $5,650 level, just as it was for $6,000 level before it failed. Lower highs. [It] doesn’t look bullish to me.” 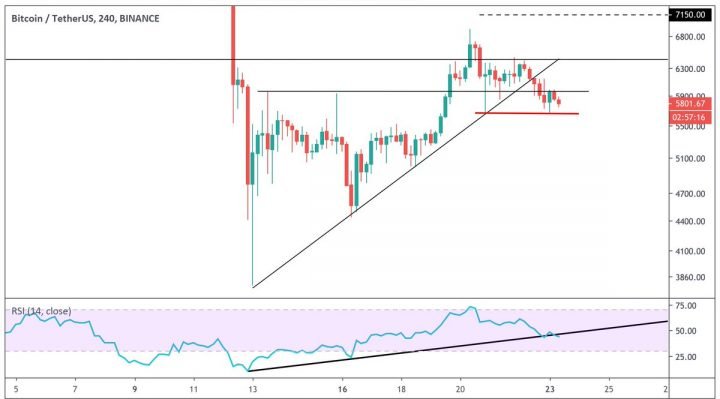 Elsewhere in the crypto market, almost all the assets fell drastically. The second-largest Ethereum dipped by more than 8 percent on a 24-hour adjusted timeframe. It’s close contender XRP suffered losses up to 7 percent. Other top coins, including Bitcoin Cash, Bitcoin SV, Litecoin, Binance Coin and others also plunged in the range of 7 to 12 percent.

US Dollar is the Safe-Haven

Investors allegedly winded up their bitcoin positions because of margin calls and Coronavirus panic. Yukio Ishizuki, FX strategist at Daiwa Securities in Tokyo. discussed with CNBC the possibility of “major players competing with each other” to hoard as much cash as they can by selling riskier assets.

The sentiment so far has hurt bitcoin, as well as all other risk-on and so-called safe-haven assets. Major central banks are doubling up efforts to introduce more cash liquidity in the market. Democrats and Republicans in the US are even trying to bring up a $1 trillion stimulus package aimed at helping distressed communities.

As a result, the US dollar has notched higher against every major currency.

Raoul Pal, the founder & CEO of Global Macro Investor, admitted that he has dumped all his short positions for dollar for now. Nevertheless, he also said that he would hold bitcoin through the Coronavirus crisis.

“The Dollar and Bitcoin is all I got right now. I’m adding to bitcoin and I’m maxed long dollars (vs EUR, GBP, AUD, BRL, MXN, KRW, CNY, JPY).”

Just an update from me, in case you are interested…

Ive just closed all short positions in equities, oil and HYG and had closed bonds a while ago. I am now 100% focussed on the on the US dollar, which is a wrecking ball.

On larger timeframes, bitcoin is indicating that it would continue its plunge to test its long-term ascending trendline support, which is a part of a giant Symmetrical Triangle – as shown in the chart below. 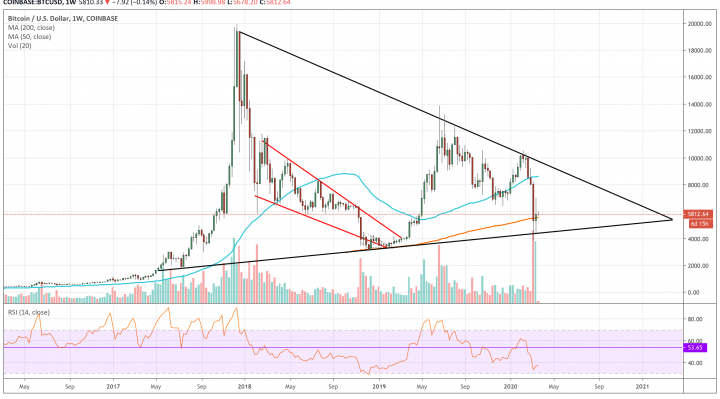 So far, the support has seen bitcoin’s demand jumping. Traders treat the meme trendline as an ideal place to enter bullish positions. At the same time, the descending trendline of the Triangle serves as a place to sell the cryptocurrency or its derivative positions for an attractive profit.

I believe that investors, like Raoul Pal, should distribute their portfolio between bitcoin and the US dollar, in whichever proportion they prefer per their risk appetite. The greenback would correct vastly once the Coronavirus pandemic shows signs of slowing down, eventually benefitting bitcoin.