Bitcoin rebounded on Monday as traders pinned their hopes on central banks introducing stimulus measures against the coronavirus outbreak.

The top cryptocurrency surged by up to 2.01 percent to hit an intraday high of $8,693.35, following a week of depressive and disorderly trading in both spot and derivative markets. But most importantly, the upside move came in tandem with similar price actions across the Asian and European markets, validating that bitcoin’s correlation with risk-on assets was growing. 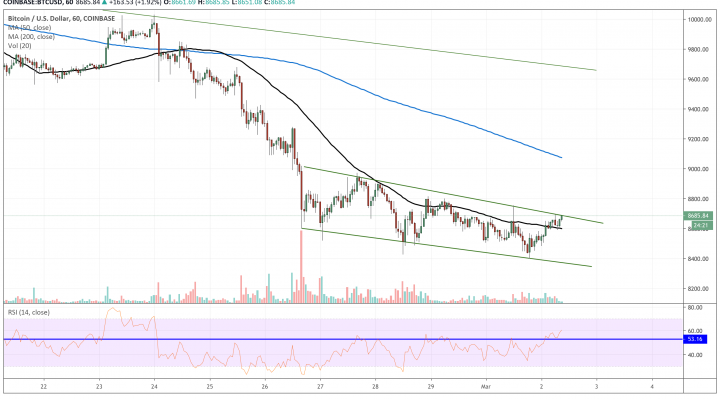 The spreading of Coronavirus sent bitcoin, as well as global markets in turmoil.

The Dow industrials registered its deepest decline since the 2008 financial crisis, falling by 14 percent in just seven days of trading. Wall Street’s benchmark, the S&P 500, too plunged by 11 percent, prompting investors to believe that the central bank will introduce safety measures.

They believe the Federal Reserve could introduce another rate cut when it meets this month. Last week, chairman Jerome Powell also confessed that they were assessing the impact of Coronvirus on the US economy.

#Italy unveils €3.6bn stimulus to tackle coronavirus. Govt to introduce tax credits for comps that reported 25% drop in revenues, as well as tax cuts and extra cash for the health system. Package will amount to 0.2% of GDP.https://t.co/vGGET0neDC pic.twitter.com/m56HXquTew

The new economic defense led analysts at Goldman Sachs to predict similar measures across the world’s major economies. They expected the UK, Canada, India, Australia, as well as South Korea to announce new rate cuts. They also hoped that the Fed would slash its lending rates by 0.5.

Hopeful fiscal policies have raised hopes for bitcoin to rebound further into the week. The cryptocurrency in February gave up a large part of its yearly gains to Coronavirus. Experts believe fund managers could redirect some portion of the new capital into bitcoin for its higher risk-reward profile.

Looking for the catalyst that propels $BTC to new highs – its coming. Just like in 2011, we’re about to see massive global, coordinated, gov’t stimulation.

But technical indicators point to a steep downside correction. Bitcoin on the daily chart has slipped below its two key moving averages – 50 DMA and 200 DMA, that has raised its probability to continue the downtrend.

“Euphoria aside, price is still in the down channel,” said Teddy Cleps, a prominent market analyst. “Down channels have a bull bias as they tend to break upwards. Closing above it would put a price on a path to 9150 – previous support now resistance.”