Bitcoin declined below the $10,000 level on Thursday as the Federal Reserve delivered a hawkish outlook on the US economy.

The benchmark cryptoasset was down by $295.26, or 2.91 percent, to $9,860 ahead of London market open. The big red candle marked bitcoin’s seventh consecutive daily session in the negative zone, indicating investors/speculators’ lack of enthusiasm in the cryptocurrency. The situation appeared the same elsewhere in the crypto market, wherein all the leading altcoins slipped by 3-5 percent, barring Stellar, which rose by more than 16 percent on a 24-hour adjusted timeframe. 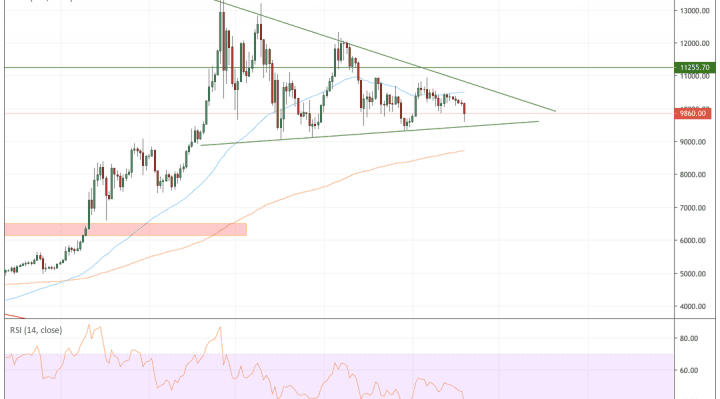 The downside move came shortly after the Federal Reserve’s decision to cut its benchmark lending rate by 25 basis points, marking its second rate cut this year. However, projections indicate that members of the Federal Open Market Committee (FOMC) is not on the same page regarding further rate cuts. That has disappointed a section of the financial market that had expected a more dovish sentiment from the Fed. As a result, the US dollar strengthened, while safe-haven assets, including Gold, dwindled.

Producer prices in China shrank most in 3 years due to China’s big devaluation of their currency, coupled with monetary stimulus. Federal Reserve not watching? Will Fed ever get into the game? Dollar strongest EVER! Really bad for exports. No Inflation…Highest Interest Rates…

Bitcoin appears to have been caught in this macroeconomic storm. The cryptocurrency, which is still up by more than 170 percent on a year-to-date basis, is expressing an interim selling sentiment. That is despite the rate-cuts-are-good-for-bitcoin narrative that has kept speculators bullish in the current financial quarter.

Nigel Green, the CEO of the crypto-focused deVere Group, said earlier this week that bitcoin would get a healthy boost from the Fed’s potential rate cut, stating that the move would decrease the incentives to keep the US dollar. Excerpts:

“Bitcoin, the world’s largest cryptocurrency by market cap, is likely to break out of its recent sideways trading pattern and be given a healthy boost by the Fed’s rate cut. It is because an interest rate cut reduces the incentive to keep the fiat currency. Also, rate cuts typically lead to higher inflation, which reduces the purchasing power of traditional currencies. As such, Bitcoin and other decentralized cryptocurrencies become more attractive, and the price will adjust upwards accordingly.”