Bitcoin appears to have run out of steam after a 3-month rally propelled it to retest yearly highs of about $10,522 last month. The price of the pioneer cryptocurrency has since eased to trade at about $9,097. The $9,100 level now appears to be providing strong support after the plunge.

The price of bitcoin is now pinned a few levels below the 100-hour and the 200-hour SMA lines in the 60-min chart. It continues to trade centrally in the 14-hour RSI.

Bitcoin’s post-halving rally appears to have ended. However, there are still some strong fundamentals that support the bull case of the pioneer crypto. The first one is the adverse economic impact of COVID-19. The global economy is expected to contract by about 5% this year according to the IMF. The US economy, on the other hand, is projected to squeeze by 8%. These figures point towards an extended recessionary period, which could hurt the greenback. Arithmetically, that should boost the BTC/USD rate higher.

But even more than that is the fact that Bitcoin is now viewed as a safe-haven currency due to its scarcity and finite nature. Therefore, just as several investors diversify some of their investments to precious metals like gold, others will be putting some money in bitcoin. Digital currencies are also gaining more popularity as big banks and some governments continue to show interest. As such, the next bitcoin rally could take the price of the pioneer crypto to new all-time highs. 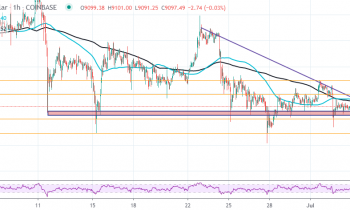 Technically, bitcoin appears to be facing strong SMA resistance from the 100-hour and the 200-hour SMAs in the 60-min chart. The BTC/USD also appears to have found strong support around $9,100. This has resulted in a consolidative triangle formation that could lead to a breakout. 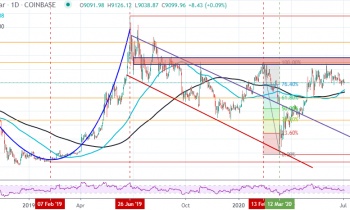 In the daily chart, the bitcoin price appears to have run out of steam after rallying to retest the current yearly highs. The $10,522 resistance level has stood firm for more than 11 months.