Bitcoin futures on Intercontinental Exchange-backed Bakkt registered its highest daily volumes on Thursday, according to data presented by BakktBot.

Traders opened a total of 224 monthly futures contracts, which was 800 percent higher than the previous day. The upside pushed Bakkt’s average daily volume to 139. Until Wednesday’s close, it was circa 88.45. At its lowest, the platform processed only 25 monthly futures. 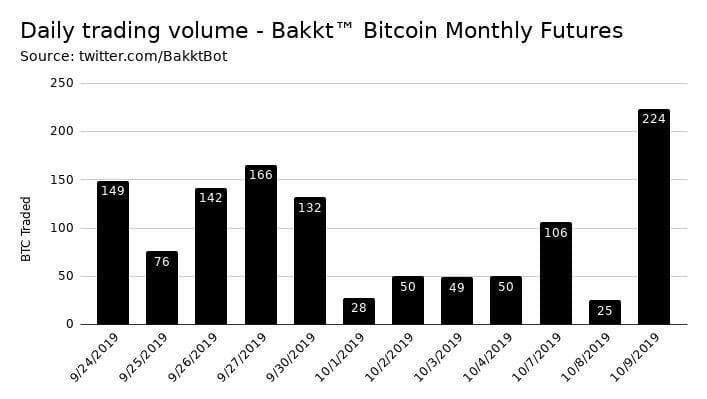 Meanwhile, the volume gains on Bakkt coincided with the rejection of yet another bitcoin exchange-traded fund (ETF) by the US Securities and Exchange Commission (SEC). Bitwise, which attempted to woo a rather skeptic US regulator with a cleaner Bitcoin ETF application, had to drop its hopes after the SEC found its proposal too risky on the grounds of price manipulation in the bitcoin spot market.

The Bakkt volume has dwindled since yesterday. It is now sitting at 25 that somewhat resonates with what Mr. Phan said: market makers considered Bakkt’s bitcoin futures contract as a hedge. On a broader scale, the intraday downside showed the lack of institutional interest in physically-settled bitcoin futures.

Vaibhav Kadikar, the founder & CEO of CloseCross – a decentralized market prediction platform, said investors prefer cash-settled futures contracts. It is because they do not want to increase their exposure to the real bitcoin, whose volatility remains a bottleneck on adoption.

But to Mati Greenspan, the senior market analyst at eToro, a physically-settled bitcoin future contract is more attractive than a cash-settled one anytime. The noted financial expert said lack of awareness is the core problem before adoption, adding that “Wall Street still does not understand the concept.”