Bitcoin has posted a minor increase today and is fighting hard to recover after the minor drop. It is narrowing on the short term, but I really hope that we’ll have a significant movement soon. It remains to see the direction because we still need a confirmation that it will increase in the upcoming period. Price has increased after the 6425.4 static support retest and after the failure to retest the broken downtrend line.

As you already know, a Bitcoin’s increase will force the crypto market to pick up as well. The major cryptocurrencies are located right below some crucial resistance level and are waiting for a boost from the Bitcoin. 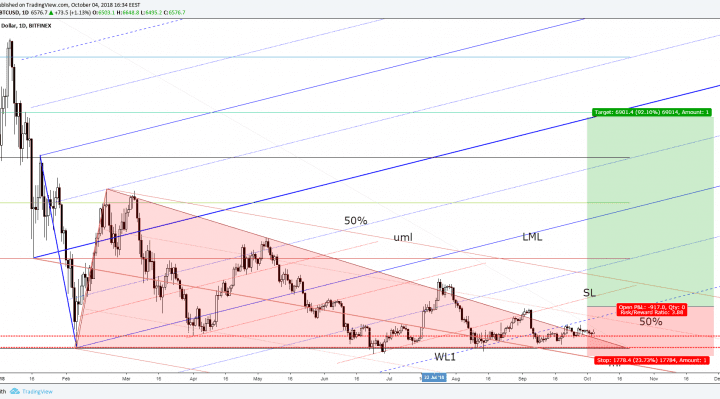 Price has decreased after the failure to retest the first warning line (WL1) of the former ascending pitchfork. It has come down, but only to retest the 6425.4 level and now is struggling to jump higher. It continues to stay much above the 6000 psychological level, but he needs to increase right away because if it will continue to stay near these levels, then we may see another sell-off.

You can see on the Daily chart that I’ve placed a trade setup and I’ve told you in the previous week that we may have a great buying opportunity if the rate will make a valid breakout above the 50% Fibonacci line of the descending pitchfork and above the WL1 of the former ascending pitchfork.

I also want to remind you that a valid breakdown below the 6000 psychological level and most important below the median line (ml) of the descending pitchfork. I really hope that we’ll have a clear direction in the upcoming days.