Bitcoin Looks to Consolidate Weekly Losses Above $9,150 After Pullback

The price of bitcoin (BTC/USD) resisted further declines on Thursday to hold firm around $9,166 after shedding last week’s gains early this week. The price of the pioneer cryptocurrency has been trading in a consolidative bearish triangle following last week’s spike.

On October 23, bitcoin plunged to bottom at around $7,303. But three days later, it rallied to top $10,540 as Libra hearings continued in Congress with Zuckerberg’s testimony. This volatility appears t have colled this week with the BTC/USD trading in a consolidative pattern formation.

From a fundamental perspective, the price of bitcoin traded with high volatility last week, a character that was reflected across all major cryptocurrencies as Libra’s Parent’s founder Zuckerberg continued to be grilled by the US Congress.

Generally, global markets remain highly volatile due to various uncertainties affecting key economies. The EU economic block and the UK are yet to sort out Brexit, but the process of separation received an extended deadline early this week, which appears to have boosted optimism.

On the other hand, the US-China trade talks ar eyet to be finalized after hitting some obstacles last week while still at “phase one”. To add pressure to the global financial markets, the Federal Reserve cut the base interest rate by a further 25 basis points to 1.75% down from 2.00%. 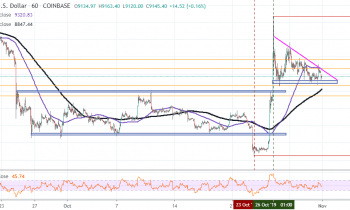 Technically, the price of bitcoin appears to be trading in a consolidative triangle formation. This could lead to another breakout downwards, which will then correct last week’s massive spike. 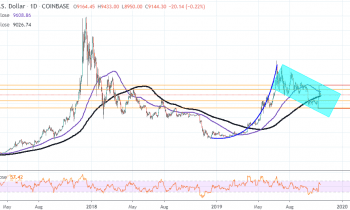 In the daily chart, the price of bitcoin appears to be still trading under strong bearish pressure despite last week’s massive spike. The BTC/USD continues to trade within a descending channel which indicates a long-term bearish bias in the market sentiment.